Trayvon Martin was on the minds of many in Washington, Aug. 24.
WW photo Brenda Ryan

Tens of thousands of people from all over the country traveled to Washington, D.C., Aug. 24 to commemorate the 50th anniversary of the March on Washington for Jobs and Freedom where the Rev. Dr. Martin Luther King Jr. made his famous “I Have a Dream” speech.

A myriad of movements, organizations and causes were represented in a crowd that was largely young. Broad cross-sections were present of the workers, along with African-American, Latino/a, Asian-American, Muslim, environmental, left, anti-war, peace, LGBTQ, women’s and disabilities rights movements. 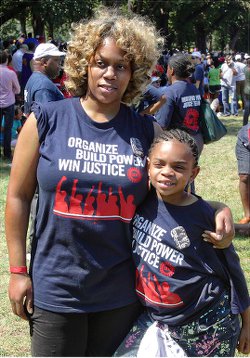 One young man told Workers World, “There are too many issues today. Fifty years ago the message was more focused against segregation and for voting rights.”

In 1963, the Democratic Party was deeply divided over Civil Rights, with a strong Southern bloc committed to maintaining legalized segregation. Today President Barack Obama is in the White House; yet African Americans remain in poverty and suffer unemployment rates twice that of whites. 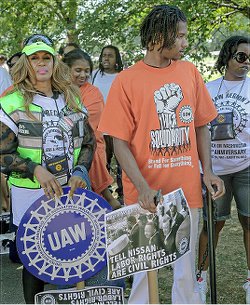 Nissan autoworkers traveled from Mississippi to D.C. They are fighting for a union.
WW photo: G. Dunkel

Also 50 years ago the Vietnam War was escalating, with thousands of so-called “military advisers” in the country attempting to prevent the victory of the Vietnamese liberation forces, led by Ho Chi Minh.

In 2013, the Pentagon, the National Security Agency and the Central Intelligence Agency are still helping to destabilize much of the world and threatening war on Syria.

The Rev. Al Sharpton, head of the National Action Network, hosted the rally, held at the Lincoln Memorial. NAN issued the call for the event.

Martin Luther King III noted, “The task is not done; the journey is not complete. The vision preached by my father a half-century ago was that his four little children would no longer live in a nation where they ‘would be judged by the color of their skin, but by the content of their character.’

“However, sadly, the tears of Trayvon Martin’s mother and father remind us that, far too frequently, the color of one’s skin remains a license to profile, to arrest and to even murder with no regard for the content of one’s character.” King called for “stand your ground” laws to be repealed in states where they have been enacted.

The spry 83-year-old Congressperson John Lewis (D-Ga.), who is the only surviving speaker from the 1963 rally, said, “Fifty years later, we cannot wait, we cannot be patient. We want our jobs and we want our freedom now … we cannot give up. We cannot give out.”

Sybrina Fulton, the mother of Trayvon Martin, told the crowd, “Trayvon Martin was my son, but he’s not just my son; he’s everybody’s son, and we have to fight for our children.”

Following the rally, a march proceeded from the Lincoln Memorial to the Martin Luther King Memorial. n