Larry Holmes, Workers World Party’s first secretary, led a three-person, party delegation to the Democratic People’s Republic of Korea at the end of July. The DPRK was celebrating the 60th anniversary of the end of the Korean War. This is an abridged version of a report he gave to WWP’s New York branch on Aug. 15. 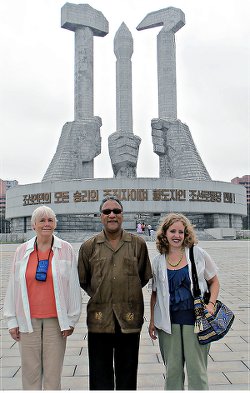 Our trip has a history to it. We have been developing a relationship with the DPRK for more than 40 years.

We were there to celebrate with people around the world the 60th anniversary of the signing of the Armistice Agreement, which ended the hostilities but not the war. This is still a very big issue in lots of ways. Our comrades in the DPRK consider that they forced not only U.S. imperialism but all of its junior imperialist partners at that time, all far superior in terms of military and economic capabilities, to cease hostilities and sign at least a temporary armistice. They consider it a tremendous victory.

We were in Pyongyang, this beautiful city, the capital of the DPRK. It had been completely destroyed in the war. My goodness, if you could see it now.

We were there a full seven days. We had a few political meetings with leading members of the Workers’ Party of Korea. Usually also attending those meetings were delegations of other countries, representing not governments but left parties.

The main activity was participating in parades, ceremonies, the opening of museums, a circus, recitals and many performances, with children doing unimaginable stuff to blow your mind.

A high point for me was walking on the Pueblo [a captured U.S. spy ship]. You saw all the confessions of the spies.

The purpose of our trip was simple — it was an important occasion for the DPRK and an opportune time to reaffirm our unwavering solidarity with them. We were not the only ones from the U.S. There was a delegation from the Socialist Workers Party. Progressive attorneys Ramsey Clark and Mara Verheyden-Hilliard were there, as was the Answer Coalition. To our knowledge, nobody else was there representing parties or organizations from the U.S.

But there should have been hundreds of people from this country on the 60th anniversary of the ending of the war — from the peace movement, from the trade unions, from the oppressed communities. If things were really right, there should have been military veterans and — although we’re familiar mostly with GIs radicalized by the Vietnam War and the wars in the Middle East — GIs radicalized by the Korean War. That would have been so tremendous. We should think in terms of that.

This is what should be the next time, given the necessary circumstances and conditions.

Of course, the DPRK comrades wanted to give all their guests a good time, but also show how united they are, that they have an unwavering level of solidarity at this time of pressure from imperialism, show how strong they are, how resolved they are to defend themselves, and their capability to resist imperialist aggression.

Koreans can’t be pushed around

This was my first time in the DPRK. They make a big impression. That military parade on July 27th, wow. And we thousands of guests weren’t the only ones from outside looking at it. There probably was a satellite up above from the Pentagon looking down at it. And the message from the Koreans was: Don’t mess with us. We want to be able to develop in peace. We want a peace treaty. We want unity. But if you think you’re going to push us around, it’s not going to go down that way.

When imperialism is threatening to bomb them into oblivion, to starve them, of course they’re going to be tough and show how disciplined they are.

People need to understand that and get beyond the propaganda, all the demonization and dehumanization. It would be such a great thing if more people from this country and from all around the world could actually visit the DPRK and talk to the people. That would be a weapon against the demonization. I wish that we could play a role in that.

The level of society, the cultural level, what they put into making sure that everyone is healthy, that everybody is fed, that the children have schools, that every generation is taken care of, whether in Pyongyang or outside the city, is just incredible.

Pyongyang has got to be the most beautiful city on the planet. And it’s not a small city. Some 3.5 million people — 14 percent of the total population — live there. It’s about the size of Chicago, but with a skyline that is immaculate, majestic and never-ending. It’s got parks for children and facilities for retired and elderly people. You walk around and you think of the U.S. propaganda — “It’s terrible there, it’s a slave state” — and you wish the people back home could see this.

Each day, we went to many different events. I couldn’t help thinking, “Imagine if our Korean comrades didn’t have to put so much into defending themselves against U.S. and Western imperialism and Japan and the puppet government in south Korea.”

They’ve done it the best way you can, by incorporating the military with the people. They have a slogan, military first, but that also means that the military is involved in farming and construction. It is not only defending the country against outside aggression but is also helping to build and see to the everyday needs of the people. What if they could put all their resources into just building socialism? What they could do, based on what they’ve already done, is unimaginable.

But based on revolutionary Marxism, it shouldn’t be on the backs of one relatively small country to fully build socialism and communism by itself. Marx would have considered that unscientific and impossible.

I was looking recently at one of [WWP founder] Sam Marcy’s early documents, written at the beginning of the Korean War. The document was based on the worldwide significance of the war, which he felt that the movement, even those claiming to be revolutionaries, were not recognizing and appreciating. Part of the title of that document was “The Destiny of the American Working Class.” He argued against those who think that the struggle of the U.S. workers is separate from that of the workers around the world. He said the struggle of the people of Korea against imperialism and colonialism is deeply connected and intertwined with the struggle of the workers here, for higher wages and for unions.

This is one of the reasons our name is not just “the socialist party” or “the communist party” but Workers World Party. The founding comrades wanted to make a point about having to think about the whole world proletariat, the whole world capitalist system and the global class war.

A stronger movement here would take some of the burden off the shoulders of the people and party of the DPRK. Until that situation changes, they will be forced to go on with what they have. They will persevere. There is no doubt about that. They are tough and strong.