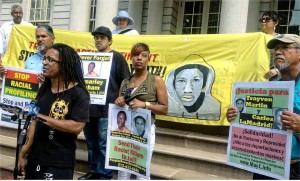 Aug. 27 — The People’s Power Assembly Movement held a press conference on the steps of New York’s City Hall in Manhattan today to announce a march and rally on Aug. 28 with the main demand: “Stop the racist war on youth of color.”

The protest is part of nationally coordinated actions called “Justice for Trayvon Martin Assemblies” in memory of the 17-year-old African-American youth fatally shot in February 2012 by vigilante George Zimmerman in Sanford, Fla. Zimmerman’s July 13 acquittal set off a wave of justified mass anger in the streets across the U.S. For many people, these events cemented the reality that the lives of youth of color are endangered daily whether by trigger-happy police or vigilantes.

The NYC action will begin with a short rally at the 25th precinct in East Harlem. Then it will march to the Harlem State Office Building for a main rally and then to the 40th precinct in South Bronx for the final rally. For more information, go to peoplespowerassemblies.org.

August 28 was picked for these protests for two important reasons:  first, Emmett Till, a 14-year-old youth, was lynched on Aug. 28, 1955, by members of the KKK in Money, Miss. Till’s funeral was attended by at least 50,000 people in his hometown of Chicago.

The second reason is that this heinous crime against Till was the date chosen for the Aug. 28, 1963, March on Washington for Jobs and Freedom, which brought out 250,000 people.

Speakers at the Aug. 27 press conference included Larry Hales, a PPA organizer, at the podium. Standing behind Hales is Constance Malcolm, the mother of Ramarley Graham, a 19-year-old who was fatally shot in his bathroom by the New York police on Feb. 2, 2012. A grand jury recently refused to indict the officer on murder charges.

The Aug. 26 press release for Aug. 28 reads in part: “We also see a parallel between the cases of police brutality, stop-and-frisk, anti-immigrant legislation, devastating wars launched by the U.S. that cause massive suffering and destruction of the countries attacked, and the conditions of poverty, unemployment, inadequate housing that exist in many communities of color, and [we] see the importance of a unified cross-community response.”