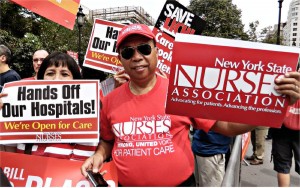 Responding to the pressure of a fairly militant coalition of unions — the New York State Nurses Association and SEIU1199 United Healthcare Workers, community groups, religious leaders and local politicians, a judge ruled Aug. 16 that medical services at Long Island College Hospital have to be maintained.

Under the guise of saving money — another name for reducing medical care for poor and working people — the state and city of New York have been closing, or trying to close, community hospitals in New York City for the past five years.  The looming effects of the Affordable Care Act, not yet fully implemented nor fully understood, have intensified their desire to cut care to the bone.

NYSNA and a coalition of community groups have scheduled a protest called “Hospitals Not Condos” at the site of St. Vincent’s on Aug. 19 to protest turning hospitals, like LICH, into very high-priced condominiums.

— Full restoration of staffing and services which were available as of July 19, including an active Emergency Department, Intensive Care Unit, inpatient medical beds, as well as laboratory, radiology, social work and pharmacy services.

— Starting inpatient surgeries by treating physicians to the extent such surgeries were permitted on July 19.

— Removal of armed guards from LICH, other than those deemed necessary for safety; this is important since these guards have harassed patients and staff.

— Issuance of a formal “retraction letter” telling patients that LICH clinics are not slated for closure unless and until the court deems otherwise.

According to a nurse who used to work at LICH, laid-off workers are being recalled. There will also be a monitor to make sure SUNY follows the court order.

LICH is very near the Brooklyn waterfront and developers and other speculators are salivating over a chance to dismember it and convert its remains into high-priced housing and offices.

The next target in this campaign of closing hospitals is the Interfaith Medical Center, which services the Bedford-Stuyvesant area of central Brooklyn, particularly low-income patients suffering from substance abuse.  IMC is currently in bankruptcy court.

Bedford-Stuyvesant, according to the 2010 Census, is about 50 percent people of color and 50 percent white. The community residents are not particularly well-off, with a median income around $50,000.

“SUNY tried to padlock this hospital four weeks ago. We’ve watched it violate court orders in broad daylight. Now, the court is putting all that to an end. These steps will ensure this community will have continuity of care for the immediate future,” said Public Advocate Bill de Blasio at a Aug. 16 press conference announcing the decision about LICH. “This is a huge step forward.”  (advocate.nyc.gov/LICH-order)

But the nurses at the conference underlined that this is not a final victory. The struggle must continue.