A science-fiction fantasy, LBGTQ love story for the 99 percent 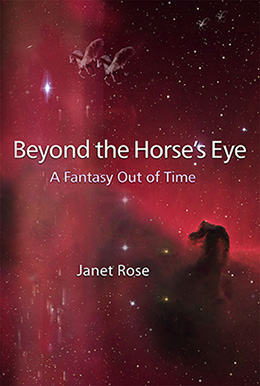 Troubled children often create imaginary friends and secret worlds to cope with impossible realities. But what if imaginary friends became real and secret worlds could be visited? “Beyond the Horse’s Eye: A Fantasy Out of Time” by Janet Rose is built around a fascinating concept: Empathy for all living things can be channeled into a powerful energy force. (Jersey City, N.J.: WordSpace Publications, 2013) This exciting read is wise and full of intuition about pain, survival, rehabilitation and change.

Science fiction is a very political medium in which hopes can be projected onto another galaxy or another dimension. With analogies and fantasy, it enables readers to envision  the world they want and perhaps to formulate how to get there.

Rose’s book revisits the 1960s, a decade rich with ferment in the United States — with opposition to the Vietnam War, the Civil Rights Movement, the fight for women’s rights, and the lesbian and gay struggle. In that period, the author writes, species beyond humans join forces with young earthlings. With “empath power,” they cooperate to change history. Worlds, energy forms and loves — lesbian, gay, bi, transgender, queer and straight — collide with unexpected results.

The writer vividly describes empath power, which holds enormous power to connect us in much deeper ways and to transform the future. Many of us already believe empathic energy has great potential. The ability to tune in to and feel the pain and joy of others is the basis of human solidarity. It underlies the determination to stand up for the most oppressed and marginalized and to link together common interests in genuine, non-exploitive ways.

In Rose’s novel, empath power is channeled to move across galaxies, time and species. For those of us living in this still primitive era of human consciousness, fighting for change means understanding the power of human solidarity. It is a great fantasy to think about how empathy can be channeled into an energy force in the future.

Capitalist society ruthlessly trims our innate ability to feel the needs and the pain of others. Socializing a child involves teaching fear, caution and suspicion about whom to talk to, love, ignore, what thoughts to allow, what identity, what gender expression and more.

Although humans are an intelligent, socially cooperative species, most of our brain capacity and abilities at this primitive era of development are not yet used or encouraged. We take for granted modern communication developments. Had people even speculated 500 years ago that it was possible to talk directly to anyone outside of hearing range, they would have been burned at the stake.

We are enormously confident that humans of a future, more equitable and sharing world will have unimaginable communication capabilities, along with abilities to use technology in new, creative and liberating ways.

The author describes many species in a densely populated universe; some we can almost recognize. Those with animal companions become aware of levels of consciousness and forms of communication most people are not yet tuned into and languages we haven’t yet learned. With analogies, Rose shows confidence that humans will eventually possess skills, intuitions and capacities not yet imagined.

Rose’s story inspires. She poses the question:  How do we get to a new world? It’s through  political struggle by those able to step beyond their own pain. People find themselves and each other in the ferment of struggles for change.

The book’s heroes are young revolutionaries whose fierce determination and confidence in their own power flare up during the 1960s. Then, raw revolutionary energy pulsated with potential and collective determination. Big breakthroughs were suddenly possible by linking with others. Collective energy surged through millions who were determined to push back old forms of oppression, racism, segregation, patriarchy and homophobia — and to challenge new attempts to dominate us.

If you believe in the power of human solidarity, in “empath power” in this era, and that another world is possible — and needed — read and savor this wonderful novel.

By self-publishing, Rose has refused to be defined by what is commercially viable in an “un-free” book market. To read excerpts and learn more about this fascinating novel, see WordSpacePublications.com. “Beyond the Horse’s Eye: A Fantasy Out of Time” is available in paperback and Kindle formats at amazon.com and in print at barnesandnoble.com.