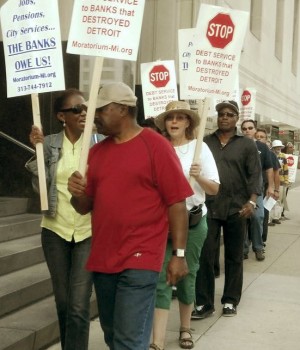 Detroiters amassed outside the federal courthouse downtown at 9 a.m. on Aug. 2 to demand, according to a popular chant, “Hands off our pensions! Make the banks pay!” The protest was called by the Moratorium NOW! Coalition to Stop Foreclosures, Evictions & Utility Shutoffs and the newly formed Stop Theft of Our Pensions Committee. Inside, a city of Detroit bankruptcy-related hearing was set for 10 a.m.

Retired city workers by the dozens, along with community members and other workers and activists, were there. So were union firefighters, active and retired members of other unions, and even a few retired Detroit cops. Wayne County Commissioner Kevin McNamara said he was on the picket line “because you [protesters] are right.” Solidarity was high among the demonstrators, several of whom echoed that Detroit is a “test case” for what the rich will try to impose on other cities across the country.

“Not a dollar, not a dime! We already did our time!” and “Who owes us? The banks owe us!” were among the angry chants initiated by retired workers. The outrage was palpable at the prospect of retirees losing their incomes so that banks could get paid the alleged debt that the banks fraudulently rigged up in the first place.

Inside, federal Bankruptcy Court Judge Steven Rhodes heard arguments on the city’s request to set up a retiree committee of its own choosing as well as on the state constitutionality of reducing pensions in the bankruptcy process. The city’s eligibility to file Chapter 9 bankruptcy is being challenged, given that the city’s and Emergency Manager Kevyn Orr’s stated intent is to go after workers’ pensions. Rhodes set a court date for late October.

Moratorium NOW! demands cancellation of Detroit’s debt to the banks; reparations or restitution by the banks to Detroit to help repair the destruction caused by the banks’ mass foreclosures and evictions; and hands off city services, workers’ wages and retirees’ pensions.

To get involved in this struggle, contact the coalition by calling 313.680.5508 or visiting Moratorium-Mi.org and Detroitdebtmoratorium.org. The coalition meets every Monday at 7 p.m. at 5920 Second Ave. in Detroit.