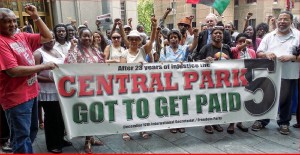 For the umpteenth time, another “Central Park 5” court hearing/status conference was adjourned on July 23. Again, the Manhattan courtroom was filled with supporters, including New York state Sen. Bill Perkins; City Councilmember Charles Barron’s assistant; and Sharrone Salaam, the mother of Yusef Salaam, one of the “Five.”

In 1989, five Black and Latino teens, known as the Central Park 5, were arrested and charged with raping a white woman in New York City’s Central Park. Confessions were coerced out of them. They were prosecuted, found guilty and served between six and 13 years in prison. In 2003, their convictions were overturned and they were exonerated of the crime.

Ten years ago, the Five, now men in their 30s, filed a federal civil rights lawsuit against the city of New York and its police department for false arrest, malicious prosecution, wrongful conviction and imprisonment, and violation of their civil rights. They are Kevin Richardson, Yusef Salaam, Raymond Santana, Antron McCray and Khorey Wise.

Attorneys for the men have been battling the legal team of the city’s Corporation Counsel, which has for over a decade been denying any wrongdoing on the part of the New York Police Department or the district attorney’s office. Both the mayor’s office and the police commissioner have refused to even apologize to the five victims, whose family lives have been devastated.

One of the many tactics used by the city is a proposal to investigate the possibility that the Central Park 5 acted in conjunction with the actual rapist, Matias Reyes, who confessed to the crime and whose DNA matched; and to also question the validity of the rapist’s confession. Despite the matching DNA and Reyes’ confession, in 2002, the police commissioner, Raymond Kelly, continued to portray the innocent Central Park 5 as guilty.

There continue to be denials of wrongdoing by the city. And the court costs to the taxpayers caused by the delays continue to rise.

There are outstanding issues and topics that still need to be discussed. There are also documents to be obtained and filed, including scheduled depositions on both sides.

The case is still in pre-trial status. The city is still performing its elaborate dance on many federal cases and no settlement offer has been made on the Central Park 5 lawsuit. The next status conference is scheduled for Sept. 17 before Judge Ronald Ellis.

Today, Black youth and men continue to be off the U.S.’s priority list. They have been viewed as wage slaves, like all workers, for exploitation. Now, these youth are enslaved in prison, in record numbers, for superprofits. The struggle for liberation continues.