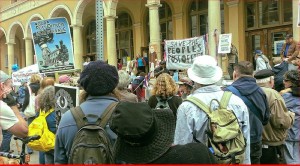 About 200 people rallied on July 27 “in direct defense of our post office” on the steps of the threatened historic main post office building in downtown Berkeley, Calif. The rally was part of a national weekend of action to save the U.S. Postal Service, including actions at threatened post offices in the Bronx, N.Y.; Portland, Ore.; Tacoma, Wash.; and at the Southern Calif. offices of Rep. Darrell Issa, who is leading the Congressional effort to dismantle and privatize the USPS.

Rally speakers included Dave Welsh, retired letter carrier and delegate to the San Francisco Labor Council; Norman Solomon, author of “Privatizing Our Future: What’s at Stake and How to Stop It”; Hannah Appel, author of “You Are Not a Loan: Debt Resistance and the Post Office”; Kriss Worthington, Berkeley City Council member; Dr. Gray Brechin, author and historical geographer; and Dorsey Nunn, of Prisoners with Children, speaking as an ex-prisoner on the importance of mail to prisoners.

At the end of the rally, the Direct Defense Action Team to Save the Berkeley Post Office announced plans to camp out on the steps of the post office, in coalition with Strike Debt Bay Area. They began to set up tents. Free food was provided by people from Occupy Oakland and other donations.

When asked about the encampment, Welsh responded about the racist nature of the campaign to demolish the post office and bust the unions. He described the USPS as “this country’s largest unionized employer. … Today the Postal Service is the largest single source of Black employment — 20 percent of the postal workforce. For many workers of all nationalities, it is one of the few places where living-wage jobs are still available in our low-pay, ‘post-industrial’ economy.

“The campaign to privatize and deunionize the USPS is a threat to the livelihood of every affected worker and neighborhood,” asserted Welsh. “But it stands to hit hardest in those communities of color that are already suffering unemployment at Great Depression levels. We need a movement that puts in the forefront those most impacted by the postal crisis — Black, Brown and rural communities, elderly, people with disabilities and low-income people.”

On day two of the encampment, people were stopping by all day long in support, reading literature about the struggle, signing petitions, donating toward food, and enjoying music provided by various talented volunteers. A general assembly was held to discuss some rules for the camp and plan for Monday’s opening of business at the post office. The protesters, who are demanding that the post office be kept open, are not blocking the entrance or trying to shut it down.