President Barack Obama visited three African states during late June and early July in an effort to remake the image of imperialism on the continent. His trip met with opposition in Senegal and South Africa and was overshadowed by developments in Egypt. 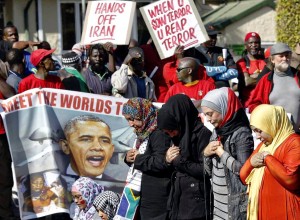 Protesters in front of the U.S. embassy during the visit of U.S. President Obama in Pretoria, South Africa, June 28.

Obama offered no tangible initiatives for Africa to enhance its relations with Washington and Wall Street, outside the existing militarist and exploitative system inherited from slavery and colonialism.

In Senegal, the president and his family visited the slave castle at Goree Island and stood in the “door of no return.” Yet the link between the Atlantic Slave Trade and the current crisis in African political economy was not addressed.

A blog by Elias Groll in Foreign Policy reported “snarled traffic, shut-down streets, and security everywhere. These are things Senegalese news outlets are talking about today — not development, investment and American engagement.” (June 27)

“The U.S. takes control of Senegal” was the headline of the Senegalese paper L’Observateur on June 27, the day of Obama’s visit.

Le Populaire’s editorial headline read, “Yankee paranoia at the Radisson.” The paper accused the U.S. of staging a de facto invasion by seizing the first-class accommodations, tampering with the communication satellites and closing roads.

U.S. agents, Le Populaire observed, not only seized the sea and the sky but also telephone communications — and the residence of the Senegalese president, which was swarming with Secret Service personnel. “These Yankees, they need to be reassured by controlling everything,” the editorial bemoaned.

Obama’s visits to South Africa and Tanzania were designed for the same purpose: to emphasize support but at the same time offer no real alternatives to the decades of post-independence policy toward the region.

Perhaps the most pronounced and politicized protests against the U.S. president took place in the Republic of South Africa, where nearly two decades ago the people organized and mobilized to overthrow white-minority rule.

Two main political forces in the struggle against apartheid and the ascendancy of the African National Congress (ANC) to power in the 1994 elections — the Congress of South African Trade Unions and the Young Communist League, the youth wing of the South African Communist Party — organized demonstrations against Washington’s policies.

At the U.S. Embassy in Pretoria on June 28, hundreds of protesters held placards and chanted slogans in support of the Palestinians and against Pentagon wars in Afghanistan, Iraq, Libya and Syria. Some burned U.S. flags and called for the release of Mumia Abu-Jamal and other U.S. political prisoners.

Demonstrations also met Obama in Cape Town, the seat of the South African parliament, and at the University of Johannesburg in Soweto, where he received an honorary doctorate degree. Police used tear gas to disperse crowds at the university, as demonstrators demanded that the degree be withheld based on the track record of the U.S. over the last few years under Obama.

The Muslim Lawyers Association of South Africa went to the country’s Constitutional Court in an effort to obtain a legal order for the arrest of Obama. The organization raised the thousands of deaths through drone attacks and other acts of aggressive warfare as the basis for seeking the detention of the U.S. leader.

Although Obama paid tribute to the legacy of former South African President Nelson Mandela, who led the ANC for many years, there was never any acknowledgement of the role the U.S. had played for decades in propping up the racist system of apartheid through military, corporate and political support. for decades.

In fact, the detention of Mandela in 1962 was carried out with the direct involvement of the Central Intelligence Agency, resulting in his imprisonment for over 27 years.

In Tanzania, Obama’s visit on July 2 was timed to coincide with one by former President George W. Bush. A strong emphasis was placed on the fight against “terrorism.” Anti-terrorist propaganda has been used to justify escalating Pentagon and CIA intervention in Africa.

Both leaders being in Tanzania at the same time confirmed the continuity of Washington’s policy toward the continent. The Pentagon’s AFRICOM (U.S. Africa Command), established under the Bush administration, has been extended and bolstered through executive and legislative action by Obama and Congress.

The U.S. is not able to come to grips with its legacy of slavery, colonialism and neo-colonialism.

An obvious omission on Obama’s first Africa trip was Kenya, where his father was born. Perhaps Obama did not visit there because the White House and State Department did not back now-President Uhuru Kenyatta in the last election. Kenyatta won anyway, in a victory seen as defying U.S. wishes.

Obama didn’t visit Zimbabwe, where the U.S. along with Britain and the European Union have imposed draconian sanctions against the government of President Robert Mugabe and the Zimbabwe African National Union-Patriot Front.

He didn’t visit Sudan, where the U.S. worked to divide the oil-rich south from the rest of the country.

U.S. policy toward Africa is based upon the economic and strategic interests of Wall Street and the Pentagon war machine. No amount of diplomacy can reverse the declining approval and rising anger toward imperialism on the part of the African workers, youth and farmers. The $7 billion in U.S. government assistance announced during the presidential visit is a small part of what U.S. corporations hope to reap from exploitation of Africa’s resources.