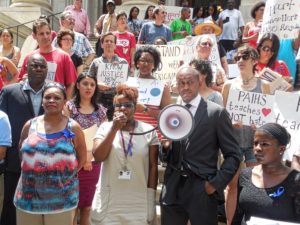 Assistant Principal Anthony Riccardo filed an affidavit with the school board against Zanca, stating he heard her use racial epithets during post-observation conferences against Heather Hightower and John Flanagan during the 2012-2013 school year. Both teachers had been fired by Zanca, who charged them with “poor performances.”

A July 5 press release, posted on the New York Collective of Radical Educators website (nycore.org), read in part, “We demand that there is a full investigation into these allegations and, if they are substantiated, that the DOE hold the principal accountable to its zero-tolerance policy against discrimination. We also demand that the discontinuances of the personnel involved (Teachers John Flanagan and Heather Hightower and AP Anthony Riccardo) be reversed.”

For more information on this development, go to tinyurl.com/kt3x2yp.