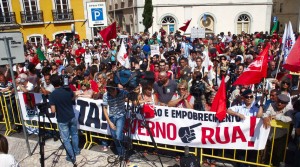 Lisbon, June 27: ‘Enough — no to impoverishment, throw the government out on the street!’ Photo: Avante

Portugal is the poorest country in Western Europe. Currently 1.5 million workers are jobless in a population of nearly 11 million. Average wages have sunk about 15 percent in the past year. To satisfy a stringent austerity program, the government has cut social security, health care, education and other benefits, and reduced workers’ job security.

The Portuguese working class answered these conditions with a political general strike on June 27 that shut the country down. Below is a statement from the odiario.info site on the strike, translated by WW managing editor John Catalinotto:

The magnificent general strike of June 27 stopped the country cold. Called by the General Confederation of Workers of Portugal (CGTP-IN), the general strike mobilized support not only of all the structures claiming to represent the workers but also those of the middle class and other sectors affected by the [center-right] PSD/CDS government’s disastrous policies. The result was a participation and support that expresses the true dimension of the overwhelming popular rejection of this government and its policies, and opened vast space to struggle for another policy.

The CGTP-IN focused clearly on the central demand of this strike: the resignation of the government and the reversal of the political direction that it pursues under the orders of the foreign Troika [the European Commission, International Monetary Fund and European Central Bank]. The strike raised this demand as an absolute necessity and a national emergency.

Workers in industry, fisheries, transport, ports, postal services, the retail trade, the financial sector, national and local public administration, media, performing arts — all areas of activity of both the public and the private sector — joined in this great, massive day of struggle. In many respects, participation in the strike showed aspects that were qualitatively new and more advanced: in sectors and layers of workers who joined; in the combativeness and courage expressed, particularly by workers in insecure jobs; and in adherence to its central objective.

In more than 50 demonstrations and assemblies in the entire country, many thousands of workers shared with the population the same unanimous cry: “Throw the government out on the street!”

For a long time now the PSD/CDS government has had no political or democratic legitimacy. It is an outlaw government that the entire country condemns and rejects. It is a government under siege, which hates the workers, the people and the country, which hates democratic rights and freedoms and would limit them, if it could, as it has been stating in a more and more open manner.

The workers, the people and the country today confirmed that they will not stop their struggle as long as this government is not swept aside. The general strike of June 27 will go down as one of the decisive events marking this battle.