July 22 — Rallies, vigils, sit-ins and marches have continued across the United States in response to the July 13 jury verdict acquitting racist vigilante George Zimmerman in the 2012 slaying of Black youth Trayvon Martin in Sanford, Fla.

These actions erupted spontaneously on July 14 and 15 and have kept up since then all over the country. The African-American community, joined in solidarity by people of many nationalities, demands justice for Trayvon Martin and an end to murderous racism and national oppression.

The hundreds of protests forced President Barack Obama to speak out about Martin for the first time since the verdict on July 19. He said, “Trayvon Martin could have been me 35 years ago,” and “the African American community is looking at this issue through a set of experiences and a history that doesn’t go away.” (whitehouse.gov, July 19)

Obama stated that successive generations seem to be “making progress in changing attitudes when it comes to race.” But, he acknowledged, “It doesn’t mean we’re in a post-racial society. It doesn’t mean that racism is eliminated.” Yet, Obama also said he would not institute “some grand, new federal program” to help ease conditions for oppressed youth.

While local demonstrations continue to oppose the verdict, the National Action Network (NAN), led nationally by the Rev. Al Sharpton, along with thousands of supporters and other groups, organized protests at federal buildings and courthouses in more than 100 cities on July 20. Tens of thousands joined in these “Justice for Trayvon” rallies to press the Department of Justice to investigate Zimmerman’s case in order to bring charges against him for violating Martin’s Civil Rights.

Below are reports primarily from Workers World correspondents around the U.S. 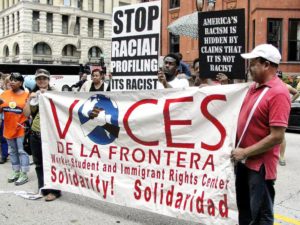 Sharpton stressed to the New York City rally’s 3,000 participants that the Aug. 24 national march in Washington, marking the 50th anniversary of the 1963 March for Jobs and Freedom, will demand “Justice for Trayvon Martin.” It is expected to draw tens of thousands from around the country who are outraged at the racist verdict a half century after the Rev. Dr. Martin Luther King’s “I Have a Dream” speech.

After the rally at One Police Plaza, the crowd marched over the Brooklyn Bridge, with some protesters continuing on Flatbush Avenue. A main chant was “Trayvon didn’t have to die, we all know the reason why, the system is guilty!” Drivers honked their horns and raised their fists in support.

Nearly 100 people demanded “Justice for Trayvon Martin” in Malcolm X Park July 20 in Poughkeepsie, N.Y., and marched to the Dutchess County Court, stopping traffic as they went through town. Civil Rights veterans, politicians, clergy and others emphasized the need to defend Black youth in light of the racist decision to free Martin’s killer.

Three days earlier, 80 people gathered at the Ulster County Courthouse in Kingston, N.Y. On the front of the building is a plaque honoring 19th-century Abolitionist leader Sojourner Truth. Among the speakers was WW contributing editor Fred Goldstein, who raised NYC police killings of Sean Bell and Amadou Diallo and the need to make a national effort to sentence Zimmerman for his crime.

In Boston on July 20, a multinational crowd chanted and held “Justice for Trayvon” signs and others calling for overturning “Stand Your Ground” laws. In a speak-out, grandmothers and others voiced their fears, “What if [Trayvon] had been my grandson?” Many told of historic fightbacks again racism.

On July 14 also in Boston, more than 1,000 African-Americans, Latinos/as, Asians and white protesters rallied outside a police station in Dudley Square’s Black community of Roxbury. Young demonstrators were joined by community leaders and Civil Rights movement veterans who spoke. Marchers then took the streets, going up Malcolm X Boulevard to the Ruggles T station near another police station and then back.

In Philadelphia, 1,500 people rallied and marched around the Federal Building July 20. The young, multinational group supported the call for a Florida boycott and the campaign to reverse “Stand Your Ground” laws. The consensus was that gaining justice for Trayvon Martin means taking on the many struggles where racism rears its ugly head — from police brutality to the school-to-prison pipeline. Speakers included Pam Africa, a leader of International Concerned Friends and Family of Mumia Abu-Jamal; attorney Michael Coard; and Paula Peoples of NAN.

In Baltimore, hundreds rallied at the downtown Federal Building July 20.  Pastor Jamal Bryant of the Empowerment Temple chaired the rally. The Baltimore People’s Power Assembly attended and distributed a local petition that calls on the Justice Department to indict Zimmerman and attacks the war on Black, Latino/a, Indigenous and poor youth.

In the southeast city of Atlanta, thousands converged, despite rain, on July 20 on the downtown street fronting the Richard Russell Federal Building. Parents brought their children to the noon rally. Youth and older workers chanted “No justice, no peace!” There was strong support for mobilizations against racial profiling and mass incarceration. A WWP banner read, “Stop the war on Black youth! No racism, police brutality and racial profiling.”

Hundreds rallied in downtown Buffalo, N.Y., on July 20 in coordination with national actions; the next evening hundreds again protested. Dozens of community group representatives decried racism and racist profiling, the “injustice” system, the school-to-prison pipeline, and the war on Black and Brown youth, immigrants, women and lesbian-gay-bi-trans-queer people. They called for organizing varied actions together.

In Pittsburgh, a diverse group of 200 people gathered at the Hill District’s Freedom Corner on July 14, angry and grief-stricken. Many wore hoodies in 90-degree heat. Byra Adams, a young African-American woman, said, “I want to feel like this is my country too. It’s not. The system was never built for us. We matter.” Later, a group sat down and blocked traffic on Centre Avenue. Police warned the crowd to disperse or face arrest. But protesters held out and stayed through the night.

Then on July 20, about 400 Pittsburghers met at the Federal Building. Speakers, rap artists and poets strengthened the crowd’s resolve to take on the challenges of racial profiling, the new Jim Crow, Pennsylvania’s Castle Doctrine, the state’s similar “Stand Your Ground” law.

On July 15 in Green Bay, Wis., a multinational group protested at the County Courthouse, demanding justice for Trayvon Martin. They marched around downtown, chanting “No justice, no peace!” and rallied at the courthouse again.

In Milwaukee, 1,000 protesters of many nationalities converged July 20 to insist on justice for Trayvon Martin. The crowd covered the entire block in front of the Federal Courthouse. A delegation from the Latino/a youth organization, Youth Empowered in the Struggle (YES), marched from Red Arrow Park to the courthouse in a show of Black and Brown unity.

Some 1,400 miles west, 200 activists and community members rallied on July 15 at the Salt Lake City Matheson Court House to assail the verdict and express anger at the U.S. “injustice” system. They demanded, “No to racism, police brutality and racial profiling!” “Jobs and schools, not jails!” “End mass incarceration and deportations!” and “End the war on youth!”  Community activists and others who had experienced racism and racial profiling spoke. Protesters marched around the city, finishing with a vigil at a government building downtown.

On the streets on the West Coast

On July 17 in Beverly Hills, Calif., the wealthiest area of Los Angeles, hundreds of protesters marched on busy Wilshire Boulevard. The Justice for Trayvon Martin Los Angeles grouping of youth and students, mostly people of color, led the protest and pledged to keep the struggle alive until justice is won.

That night, LA Mayor Eric Garcetti and Police Chief Charlie Beck declared that due to “vandalism,” including a raid on Walmart’s, free speech and free assembly rights would be curtailed in South Central LA. Beck told parents to “Tell your children not to go out to Crenshaw [Boulevard] tomorrow.”

On July 18, as ordered by Garcetti and Beck — even though thousands had protested for five days without “incident” — truckloads of cops wielding assault rifles rode up and down Crenshaw, where most LA protests have occurred. Police cruisers and helicopters flooded the adjoining communities to intimidate residents.

On July 20, 300 people joined the NAN rally at the LA Federal Courthouse and then marched downtown, with many joining them.  Speakers included community leaders and clergy. John Parker, West Coast International Action Center coordinator, announced a People’s Power Assembly Speakout and Strategy Session in LA on Sat., July 27, to build a united struggle to stop business as usual until justice is won. It’s at Kaos Network near Leimert Park; for more information, call 323-306-6240.

A July 21 anti-police brutality rally was held in Anaheim, Calif., by the Answer Coalition and relatives of victims of police killings, including the Alan Blueford and Oscar Grant families. Hundreds marched to the Anaheim Police Station, where speakers blasted the increase in racist lynchings by police of Black and Brown youth. The IAC and Workers World Party marched with the San Diego Committee against Police Abuse. Their signs linked the struggles against police brutality with the demand for justice for Trayvon.

Other demonstrations on July 20 took place in San Francisco, Detroit, and Jersey City and Newark, N.J.

The struggle continues for justice for Trayvon Martin.