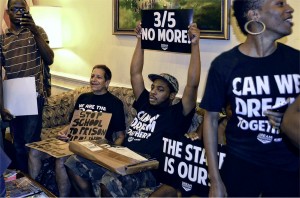 July 22 — The reaction to the July 13 “not-guilty” verdict for racist vigilante, George Zimmerman — who fatally shot unarmed 17-year-old, Trayvon Martin, last year in Sanford, Fla. — continues to evoke various kinds of protests all over the U.S., including in Florida.

One of the most dynamic protests there is entering its second week at the state Capitol in Tallahassee.  On July 16, the Dream Defenders — activists who are mainly African-American, Latino/a and some white youth — took over Gov. Rick Scott’s office in a sit-in and have not left.

Their main slogans are “The State is Ours!” and “3/5 No More!” — which pertains to the Dred Scott decision made by the U.S. Supreme Court in 1857 that declared enslaved Africans less than human.

The activists are demanding that the governor call a special legislative session to repeal the Stand Your Ground law, which Zimmerman initially used as an “excuse” to kill Martin, whom he claimed look “suspicious.” The Sanford police did not arrest Zimmerman until massive protests prompted his arrest six weeks after the atrocity took place.

This state law, in general, says that anyone who feels “threatened” by someone has the right to use deadly force to defend herself or himself.  In reality, this law has been used to criminalize mainly people of color, such as Martin and Jordan Davis, another 17-year-old unarmed Black youth shot to death by Michael Dunn, a white man, on Nov. 23, 2012.

What was Davis’ so-called crime?  Dunn claimed that Davis and his friends were playing their music too loud next to his car.  Dunn goes to trial on murder charges in Jacksonville, Fla., in September.

And then there is the case of Marissa Alexander, a young African-American single mother of three children, who was sentenced to 20 years in prison for firing warning shots against her abusive ex-spouse.  The same Florida state attorney, Angela Corey, who led the prosecution team in the Zimmerman case, prosecuted Alexander for standing her ground, which led to her unjust conviction.  Alexander had the right to defend herself and her children from a real threat.

It took Gov. Scott two days to meet with the Dream Defenders — where he’d have to listen to their demands and concerns.  In the end, Scott reiterated his support for Stand Your Ground.  He then stated that he would not call a special legislative session.  The Defenders’ response was that the sit-in would continue indefinitely.

The Defenders are demanding the passage of a Trayvon Martin Act to outlaw racial profiling, the Stand Your Ground law and the school-to-prison pipeline policies.

Since the sit-in began, it has more than doubled in size.  In a July 18 press release, Defenders’ field director, Curtis Hierro, stated, “Rick Scott has awoken a sleeping giant.  We are going to work.  Dream Defenders call for people around the nation to converge at Florida’s Capitol to join us as we stand our ground for Trayvon.”

The Dream Defenders are organizing a petition campaign to gather more than 50,000 signatures in support of the Trayvon Martin Act.  Supporters from around the U.S. are planning to converge in Tallahassee in solidarity with the sit-in throughout the coming week.  Go to their “Take Over Tuesday” website at tinyurl.com/lxowt9t or @Dreamdefenders at Twitter for more information.