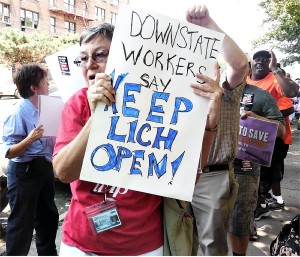 In an ongoing struggle to stop the closing of four hospitals in Brooklyn, N.Y., a protest was held July 15 at State University of New York (SUNY) Downstate Hospital where a board meeting was being held. Along with Downstate, Long Island Community Hospital, Brookdale and Interfaith Medical Center are facing possible closing, even though they supply vital services for some of the poorest communities, especially those of color. The layoffs at these hospitals will also have a devastating impact on tens of thousands of workers and their families.

Hospital workers led chants such as “Take our hospitals out of critical condition!” “Hands off our health care!”  and “They say cut back, we say fight back!” The protest was organized by Healthcare Workers East 1199SEIU and the New York State Nurses Association and drew support from local community groups and several politicians. Another march and rally will take place July 24 to “mourn the death of health care in Brooklyn.” For more information, go to keepbrooklynhealthy.org.