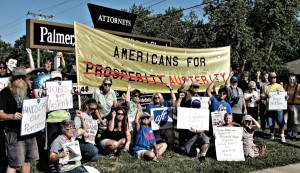 A rainbow of working people from across Kansas boldly confronted the extreme right-wing Americans for Prosperity group at its two locations in Topeka and Wichita on July 10 in 90-degree heat. In both locations, protesters unfurled colorful banners and signs that renamed the AFP the “Americans for Austerity.”

AFP is funded by the infamous billionaire brothers, Charles and David Koch, and other Wall Street interests such as the MacIver Institute and the Lynde and Harry Bradley Foundation. The Koch brothers are following in the political footsteps of their anti-communist father, Fred C. Koch, who co-founded the John Birch Society.

Chanting “They say cut back, we say fight back,” “Hands off our children,” “Hands off our pensions,” “Hands off women” and other slogans, over 150 participants from across northeastern and central Kansas protested in Topeka. The diverse crowd of many ages, genders, sexualities, disabilities and nationalities made clear their fightback spirit, taking up two sides of the street right in front of the AFP office on the city’s main boulevard with their banners, signs and bullhorn. They received numerous honks of support from cars passing by.

In Wichita, about 30 protesters gave the AFP office there a similar reception.

The July 10 actions received widespread media coverage before, during and after the events. The protesters forced AFP to respond, which they did with a derisive anti-worker, anti-community statement that praised the Jim Crow, right-to-work-for-less wage slave law in Kansas.

On the same day the AFP protests took place, ultra-rightist Charles Koch launched one of his new campaigns, which includes a demand to eliminate the minimum wage.

AFP’s goals include union busting, deregulation and privatization. According to environment-friendly organizations such as the Sierra Club, the Koch brothers, through their oil and gas industries, continue to engage in wanton environmental destruction. AFP money is behind politicians like Wisconsin Gov. Scott Walker, North Carolina Gov. Pat McCrory and that state’s Budget Director Art Pope.

AFP money, along with that of other right-wing organizations such as the American Legislative Exchange Council (ALEC), has bought virtually every Kansas politician in the current legislature. This resulted in the 2013 session being one of the worst anti-worker, anti-community legislative sessions in Kansas history.

But as July 10 showed, there is a progressive current in Kansas. More and more working people are starting to fight back in their own interests, especially in response to ever deeper austerity pushed by Wall Street fronts like the AFP.