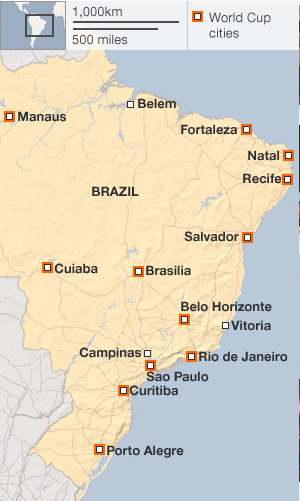 Brazil makes up almost half of South America in area and population, now nearly 200 million. Brazilians demonstrated in cities all over this vast country.

June 24 — When the Free Fare Movement (MPL) in Sao Paolo, Brazil, initiated a call on social media for a demonstration on June 6 to protest an increase of public transport fares in the city, no one imagined the enormous response it would elicit and its political repercussions.

Within a week, the 5,000 people who began a march to Paulista Avenue, the financial center of Sao Paulo, grew into a truly gigantic movement of more than a million people across the country. They not only embraced the demand rejecting the public transport fare hike, but added other demands.

Root of the protests

The MPL had emerged in 2005, advocating free fare on public transport for students. It then expanded the demand to include all people.

Confronted with the announcement that the city of Sao Paulo was going to increase the fare by the equivalent of 9 cents a ride, the MPL made a call on its website (saopaulo.mpl.org.br) and on Facebook. Initially, the demonstrators gathered outside the Municipal Theater and from there marched to the streets in the city center.

The military police responded with violence. However, repressing the protesters not only strengthened their determination to continue the struggle but awakened the solidarity of millions of people around the country.

The demonstrations multiplied spontaneously, convened primarily through social media like Facebook and Twitter. They had no clear direction. In addition to Sao Paulo, there were protests in about 100 cities, including major metropolitan centers such as Rio de Janeiro, Brasilia and Belo Horizonte.

The additional demands included, among others, more funds in the budget for health and education. Brazil is now hosting the FIFA Confederations Cup in preparation for the Soccer World Cup in 2014 and the Olympics in 2016. The demand voiced by most people is that the money invested in promotion of the games and in the construction of stadiums and surrounding facilities in various parts of the country be used instead to improve health services, housing, education and transportation for the people.

That these demands have resonated so deeply was shown in recent surveys that indicate 75 percent of people support the protests. The strength of the protests already led to the cancellation of the planned rate hikes in Sao Paulo and other cities. This concession led, however, not to the suspension of the protests, but to their intensification and the addition of other demands. The knowledge that the people demonstrating in the streets together can achieve the changes they want, need and deserve supported this growth in confidence.

Most leftist political parties, trade unions and social movements such as the Landless Movement (MST), those representing Afro-Brazilians, LGBTQ, women, youth, Via Campesina and many others have joined the mobilizations called by MPL and other spontaneous demonstrations. All these movements in turn have increased demands for a more democratic Brazil, more just, equal and leading to socialism — something that was not on the Workers’ Party (PT) government’s agenda.

An important statement of the majority in the movements in struggle is that they are not against current President Dilma Rousseff, but they want this government to respond to the needs of the people and not to the interests of the oligarchs and corporations.

Globo Network is one of the largest and most powerful media companies in Latin America. It is allied with the right-wing opposition to the Workers’ Party government of former President Ignacio Lula da Silva and current President Rousseff.It and other corporate media outlets have begun to intervene in the demonstrations, imposing slogans and demands against Rousseff and the PT government.

Although the PT government has not proclaimed socialism as a goal — as have the countries in the ALBA alliance (Bolivarian Alliance for the Peoples of Our America) — it has carried out some reforms to improve the conditions of the poor in Brazil; however, these have been insufficient. And while this government is not as neoliberal — that is, committed to privatization and cutting government programs, etc. — as the prior rightist governments were, its reforms have not changed the class basis of economic power in Brazil. Now the PT is at a crossroad between ruling “against the people or for the people,” as many in the movements put it.

The rightist forces, seeing the success of the calls to action and without a prospect of winning in the 2014 presidential election against the PT and restoring full neoliberal politics — which would include revoking benefits for the very poor, expanding privatization and having closer cooperation with U.S. imperialism — began to intervene in the demonstrations. The Confederation of Workers of Brazil (CTB) has explained this in a widely circulated statement:

“Certainly, it was not for the sake of democracy or love for the people that the pro-coup media, led by the Globo Network, have been helping to convene the demonstrations and at the same time instigating popular hatred against political parties, politics in general, social movement organizations, governments and institutions. The neoliberal right, repeatedly defeated at the polls, wants to fish in murky waters, manipulating the spontaneous movement of the masses at a time when this has neither a clear path nor direction.” (Portalctb.org.br)

For this reason, a part of the movement, including the MPL, chose not to call any demonstrations for several days in order to establish clearly the basis for subsequent calls and the best way to proceed.

President Rousseff has responded to the demonstrations with the aim of engaging the movements in struggle in dialogue. She has pledged to continue to meet their demands and to improve public services.

She called for a “Great Covenant,” including the state governors, mayors and demonstration leaders. This “covenant” would be based on three pillars: the development of a national plan for urban mobility that favors public transport, the allocation of all oil royalties toward education, and recruitment of foreign doctors to expand the healthcare system — which would include doctors from Cuba.

To move toward this goal she convened meetings for the afternoon of June 24 and the morning of June 25. She plans to meet first with the MPL, then with governors and mayors, and on June 25 with the labor union federations.

Meanwhile, beyond any doubt, the struggle continues. Workers World-Mundo Obrero was able to talk with two leaders of the CTB on the afternoon of June 24 to get a better idea of ​​the situation:  Humberto Martins, advisor to the president of the CTB, who was in Sao Paulo, and Joao Batista, from the Department of International Relations, who had just arrived in Rio de Janeiro. The CTB is part of the broad group of organizations and unions that joined the calls from the start.

It is important to note that sectors of the left have continued mobilizing, despite the call of the MPL and other groups to suspend mobilizations for a few days due to infiltration by the right, people who in many cases were neo-fascists. In this regard, the CTB issued a declaration, mentioned above, entitled “Right-wing infiltration seeks to manipulate popular demonstrations.” The last two paragraphs read:

“Social problems in Brazil, some of them secular, are gigantic, and despite the progress made in the last 10 years, they demand an urgent solution. This is the reading we must make of the sentiment of this popular revolt. The trade union movement must not leave the streets nor abdicate from the struggle, because only through mobilization and struggle will we be able to move toward a new national project of development with sovereignty, democracy and recognition of the value of work. But we must not be accomplices or play the game of the pro-coup media.

“It is our obligation to alert the working class to the risk of a retreat and fight to expose and defeat the forces of the right that are dedicated to manipulating and undermining the spontaneous movement of our people for a better Brazil, with more democracy, equality and justice.” (portalctb.org.br)

Both leaders stated to WW-MO the importance of the meeting of leftist organizations on June 21, in which the CTB took part. This meeting established the unity of action of important sectors of the Brazilian left. At that meeting, 76 organizations, including the categories mentioned above that represent a wide range of Brazilian progressive forces, assessed the situation of the demonstrations and their role within them.

Batista added that there have been various calls for demonstrations around the country this week, yet the most important fact is the unity of action accomplished at the June 21 meeting.

Details of the interviews will be covered in a later article.