By Gloria Verdieu and Terri Kay 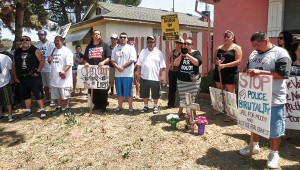 Manteca, Calif. — Hundreds of supporters, friends and family from all over the state of California gathered in the city of Manteca at 200 Flores Ave. on June 9. This was the site where Ernest Duenez Jr. was murdered by Manteca police officer John Moody on June 8. The video of Duenez’s killing, posted on YouTube, has been viewed by millions worldwide.

At the June 9 vigil, participants formed a huge circle of peace and unity, while Christina Arechiga said a prayer for all the families of loved ones murdered by police, security guards and vigilantes. This was followed by a message of solidarity from Uncle Bobby, the uncle of slain youth Oscar Grant. Uncle Bobby was on his way to Florida to support the family of Trayvon Martin. Jury selection began June 10 in the murder trial of George Zimmerman.

Marchers took to the streets chanting, “Whose streets? Our streets!” “Justice for Ernest! Jail for Moody!” “No justice! No peace! No racist police!” and “Killer cops off our streets!”

Winding through the city of Manteca to the Manteca Police Department, the protest, led by Duenez’s family, swelled to more than 250 protesters. The National Brown Berets Santa Paula Unit was a strong contingent in the march and presented a powerful presence in front of the police department.