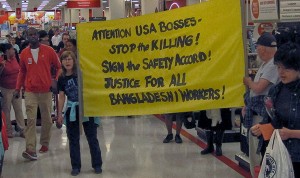 The 99 Pickets and the Rude Mechanical Orchestra held a strong, militant protest inside Target’s main Brooklyn, N.Y., store on June 13. Some 35 people participated in the protest. The 99 Pickets is an Occupy Wall Street collective that has recently been focusing on supporting Bangladeshi workers.

While protesters gathered one by one on the top floor, a 99 Pickets spokesperson explained that Target, like other major U.S. retailers, had refused to sign a recently negotiated and legally enforceable Bangladesh Accord on Fire and Building Safety because it might cost them money.

The talk was amplified by using “mic checks,” with protesters repeating in unison what the spokesperson said. The RMO contributed drum rolls and trumpet calls.

Soon after the “mic check” began, store security, including at least 10 uniformed cops, a police lieutenant and two undercovers, rushed over and told the protesters they had to leave. Which they did — slowly, and with accompaniment from the RMO.

The cops insisted that the protesters not only leave the store but also the Atlantic Center Mall, where the store is located. Since it was raining very hard outside, the protesters stopped to put on their raincoats and pull out their umbrellas. The cops got antsy in the confusion and arrested one young woman. She was taken to the local precinct and held overnight.

Anne Pruden, one of the protesters, told Workers World, “It was a strong action in support of oppressed Bangladeshi workers. The Brooklyn cops showed what side they are on by their totally unjustified arrest.” n