Milwaukee — On June 1, striking Palermo’s workers and their allies marched 18 miles from the Palermo’s Pizza factory in Milwaukee to the home of co-owner Angelo Fallucca in Mequon, Wis., a wealthy suburb. 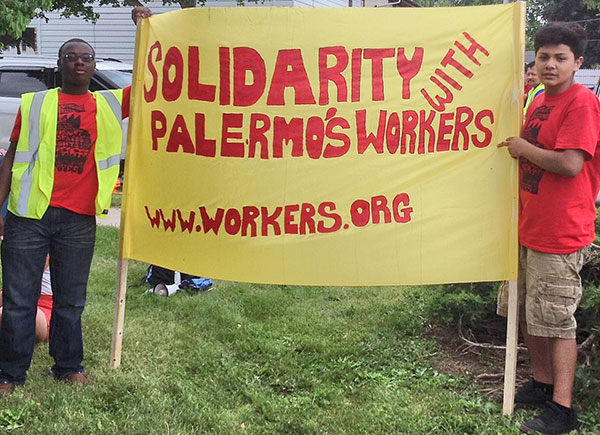 The march was held on the one-year anniversary of a walkout of over 100 mostly Latino/a workers with grievances, including low wages, excessive overtime, numerous safety violations and speedups. The striking workers also say that management threatens undocumented workers with being turned over to the Immigration Customs Enforcement when they voice their concerns and fires pro-union workers. The strike continues.

“It’s not right to pay minimum wage to these workers who work seven days a week, many hours without a break, so that’s why I’m here to support these workers. If I’m a millionaire maybe I wouldn’t be here, but I’m a worker so I’m in solidarity with these workers,” Mario Ramírez, of Voces de la Frontera, told Workers World.

The march had a broad range of participants including immigrants, people of color, retirees, children, unions and students. Numerous labor-community organizations statewide endorsed the march.

Casey Sweeny, a student from New York, said, “These workers deserve justice and as a student I stand in solidarity with them.” Students at the University of Wisconsin-Madison and UW-Milwaukee over the past year have engaged in numerous protest actions, including sit-ins of administrative offices, in efforts to end Palermo’s contracts with those universities. Youth Empowered in the Struggle — YES, the youth arm of Voces, and other student organizations such as Students for a Democratic Society, are staunch allies of the Palermo’s workers and continue to engage in numerous solidarity activities.

Recent victories for these workers include the Occupational Safety and Health Administration citing Palermo’s for eight safety violations and Fresh Madison Market near the UW-Madison campus recently announcing it will no longer carry Palermo’s products. These victories help push the striking workers and their allies to continue the struggle for a union and better wages and working conditions. A nationwide boycott of Palermo’s products continues.

For more information and to support the Palermo’s workers:sliceofjustice.com