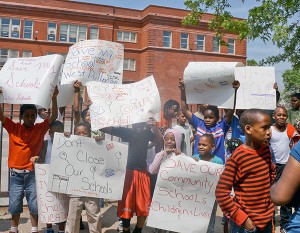 Despite a heroic series of demonstrations led by the Chicago Teachers Union that involved support from school pupils and community organizations, the Chicago Board of Education and the right-wing, anti-people, anti-Black administration of Chicago Mayor Rahm Emanuel closed 50 schools in a decision that took less than two minutes.

The May 22 decision means that 27,000 children will have to change schools in the fall school session.

CTU President Karen Lewis said this in her statement responding to the closing: “The parents are amazing leaders in their school communities, and because of this administration’s actions we have all become closer and more united. We must resist this neoliberal savagery masquerading as school reform. We must resist racism in all of its forms as well as the escalating attacks on the working class and the poor. Our movement will continue.” (dianeravitch.net, May 22)

CTU, which is American Federation of Teachers Local 1, had just reelected Lewis, its popular, struggle-oriented leader who has provided bold leadership in resisting Emanuel’s war on public education and oppressed national communities.

Emanuel has been waging a war against public education. City Hall and the heads of the Chicago Public Schools system claim that many schools in the city are “underutilized.” They use this as an excuse for their plans to shut these schools down.

The truth is that most CPS schools are overcrowded and underfunded. And the schools targeted for closing are almost exclusively located in Black or Latino/a communities.

CPS has also waged a war on Black teachers, drastically reducing their numbers ever since the years when Mayor Richard M. Daley ruled the city with an iron hand. Emanuel has continued and expanded Daley’s racist policies, and is in the process of trying to create a two-tiered, apartheid, “separate but equal” school system. That would have underperforming, non-union charter schools for working-class and oppressed nation communities and well-funded magnet schools and private academies for children of the bourgeois brahmins, represented by the Emanuel administration.

The Board of Ed is facing a lawsuit, filed by Black parents and the parents of disabled children, charging that the school closings violate the Americans with Disabilities Act and the Illinois Civil Rights Act.

‘Hands off our schools’

A three-day march began on May 18 at the Jesse Owens Elementary School located on 12450 South State Street. Students, parents, teachers and supporters marched for justice.

CTU Recording Secretary Michael Brunson told the demonstration: “We have had enough. For too long there has been an assault on public schools, public services and public properties. We will not let you take our public schools. The mayor and the school board are about to make the largest school closing in the history of this nation.” (chicago.cbslocal.com, May 18)

West Pullman elementary school students were present at the march for justice. “Hands off our schools,” they demanded.

On May 20, after a morning filled with marches and demonstrations in communities whose schools are targeted to be closed, CTU members and their allies marched on City Hall with chants like “Hey Rahm, let’s face it, school closures are racist!”

Adapting a popular slogan from the movement to free Black political pris­oner Mumia Abu-Jamal, they chanted, “Brick by brick, wall by wall, no school closings, save them all!”

CTU activists and allies delivered a petition to the mayor’s office demanding a moratorium on school closings and then blocked access to ground-floor elevators at City Hall, underlining their commitment to keep the schools open. Some 26 people were arrested in this bold civil disobedience action.

The demonstrators, nearly 1,000 strong, then took over the nearby intersection of LaSalle and Washington on their way to the Daley Center for a huge rally, which included many students, parents and teachers.

The only way to stop the Emanuel administration and CPS from pushing forward their racist privatization agenda is the path of struggle opened up by Karen Lewis and the CTU.

Patricia Linarez contributed to this article.