As this article goes to print, 57 more people were arrested during the “Moral Monday” action on May 20. More than 500 came out to rally and pack the legislature in support of the civil disobedience action.

On April 29, about 50 people, led by the Rev. Barber, marched into the state legislative building in Raleigh. Seventeen people blocked the door to the Senate chambers and refused to move until they were arrested. 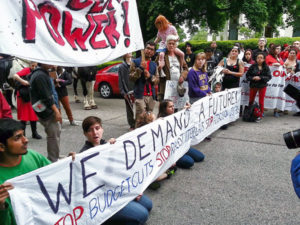 Only one day later, on May Day, hundreds of students from across the state took to the streets in a march organized by the North Carolina Student Power Union and others groups. The students shut down Jones Street, the location of the North Carolina legislature, unfurling a banner reading, “We demand a future: Stop budget cuts! Stop racist voter laws! Stop attacks on workers!” Eventually five students were arrested as they attempted to enter the legislative building.

Dhruv Pathak, a student at the University of North Carolina at Greensboro and member of the NCSPU who was one of the five arrested, highlighted the clear class-based current within the onslaught of legislative attacks. In recorded testimony ahead of his arrest, he said, “My family struggles financially every single day. We have a hard time making ends meet, and the last thing we need is for a millionaire sitting in the General Assembly to take our financial aid away.”

Within the past few weeks the numbers of those joining “Moral Mondays” protests at the state legislature have continued to swell. This wave of mounting resistance has emboldened and inspired various sectors of the left, including labor.

Subsequent Monday actions led by the NC NAACP have taken broad approaches, raising various struggles and attacks on the working class and communities of color.

The “third wave action” on Monday, May 13, focused on combating attacks on worker rights, was the largest action yet. More than 200 people marched into the General Assembly building, filling two floors, and nearly 50 people were arrested. Many rank-and-file workers from the North Carolina Public Workers Union, UE Local 150, and members of other unions were among those arrested, bringing the total number of arrests since April 29 to more than 100.

The right wing rose to power in North Carolina backed by millions of dollars primarily from Koch brothers’ protégé and ultra-conservative leader Art Pope. The multimillionaire CEO of the discount store chain Variety Wholesalers, Pope provides more than 85 percent of the funding for a network of far-right organizations pushing an agenda grounded in racist and “free-market” ideology. That agenda includes privatizing vital public services.

Americans for Prosperity (which Pope funds heavily and of which he was North Carolina state chair until recently), the American Legislative Exchange Council and other national right-wing groups have also exerted a heavy influence on the right’s rise to power in North Carolina.

In the 2012 election, Tea Party politicians took a supermajority in both houses of the state legislature and locked in the governor’s seat. Shortly after the election, Pope was appointed chief budget writer for the state, granting him sweeping power to more thoroughly execute his ideological vision to dismantle public services in the state. Many Pope affiliates were appointed by the governor to high-ranking positions.

Since taking power, the right wing has been waging a vicious and thoroughly racist assault on basic democratic rights and has sought to dismantle and defund the public sector. The attacks are innumerable, and an exhaustive list could undoubtedly fill the pages of this newspaper.

At the beginning of May, the Senate unveiled a sweeping tax “reform” scheme. By their own estimates, this plan would wipe out more than $1 billion in state revenue, setting the stage for deeper cuts, and would lower or completely eliminate both the personal and corporate income tax, while raising and expanding the sales tax. Poor and working people will see their taxes rise, while the rich and corporations will walk away with dramatic tax cuts.

North Carolina is one of the least unionized states in the country. Those in power here seek to smash the organizations of poor and working people altogether. Among the many pieces of legislation making their way quickly through both houses are those that would gut the state personnel act, which outlines legal guidelines, rights and protections for public employees in North Carolina; make the Jim-Crow-era ban on collective bargaining rights for public sector workers and voluntary card check for private sector workers a constitutional amendment; and ban the use of payroll deductions for city and local government workers to voluntarily contribute their union dues.

The last comes on the heels of a recent victory by public workers in Charlotte and their union, UE Local 150, which won payroll dues deduction for the first time, and new organizing by workers in Greensboro.

What is happening in North Carolina is not unique. While the ferocity and speed with which the right are moving is without a doubt alarming, what’s happening here is part of a broader national and international strategy by sections of the ruling class in this period of capitalism at a dead end.

The type of brutal austerity that governments throughout Europe and other parts of the world have introduced is starting to make its way here in North Carolina.

The cannibalization of public education and services comes at a time in which the world capitalist system is embroiled in a permanent crisis from which it cannot recover. Mass unemployment is a feature of this stage of capitalism, and this approach to dealing with the crisis is motivated by the bosses’ recognition that fewer and fewer workers are needed, rendering public education and even the most meager of public services to sustain the conditions of basic survival for the working class unnecessary.

As funding to schools is slashed, funding for prisons is at an all-time high. This crisis most severely impacts people of color, women, lesbian/gay/bi/trans/queer communities, and other oppressed sections of the working class.

The same approach is being taken in states across the U.S. and is largely coordinated and directed by the American Legislative Exchange Council. ALEC is a far-right organization made up of representatives of many of the world’s largest and most powerful corporations, along with state legislators.

Through ALEC, corporations hand down bills to state legislators. Some of the most heinous pieces of legislation being advanced right now in North Carolina are identical or nearly identical to bills being introduced in other states whose roots can be traced back to ALEC.

The right wing wants the Art Popes of the world and the bosses to have direct control and power over every branch of government so they can have the maximum ability to exploit our labor and divide our class.

Sharpening the tools of resistance

Rather than quietly submitting to the extreme conservative program being forcefully pushed through the legislature, the people of North Carolina are fighting back — just like working-class communities all over the world are standing up against austerity and political repression.

Rooted in a rich legacy in North Carolina of Civil Rights and Black worker justice movements, and recalling other momentous sparks of mass resistance like the Greensboro sit-ins, these protests have served to raise anti-racist consciousness and expose the hypocrisies of the right-wing majority.

These actions have also played an important role in sharpening the contradictions that exist within the right’s majority bloc.

Similar to the upsurge of resistance and occupation in Wisconsin in response to attacks on collective bargaining rights, mass resistance in North Carolina has the potential to once again capture international imagination as a frontline of opposition to neoliberal excess and reactionary governance. The Wisconsin protests shook the national conscience in 2011 and stunned many who claimed that the days of militant, union-led resistance were over.

While mass civil disobedience is not unheard of in North Carolina, the breadth of this fightback is unprecedented, and has served to radicalize many across the state who have never before engaged in such a level of protest. The impacts have been far reaching and have helped to bring forward new layers of resistance.

While it remains to be seen how these Monday actions will affect the material reality of the working class in North Carolina, it is fair to assume that these actions have shifted the conversation on responding to reactionary attacks throughout the state. These actions have awoken a mighty struggle in North Carolina, and will hopefully serve as an inspiration to working people facing similar attacks across the U.S.

Silence and inaction are no longer an option.

Alsous and Carroll are members of the N.C. Student Power Union.