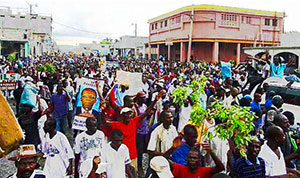 Thousands of Haitians turn out to support Aristide.
Photo: Erzilidanto

Haiti’s judicial police headquarters had banned demonstrations in support of former President Jean-Bertrand Aristide. So, on May 8, tens of thousands of Haitians marched alongside Aristide’s motorcade after he gave testimony in the courthouse in Port-au-Prince, the country’s capital. They escorted him home.

Aristide provided testimony about Jean Dominique, a popular journalist who was assassinated in 2000 between Aristide’s two presidential terms. Dominique’s murder has never been solved.

Aristide took five hours to get home, passing through downtown Port-au-Prince, the Champ de Mars, the hillside slum of Belair, Delmas 2, and then alongside the old military airport and past the international airport — some of the poorest neighborhoods in the capital.

The crowd swelled as the procession continued and people chanted, sang and waved posters. A popular slogan was, “The more they prosecute you, the more we support you!”

Aristide got out of his car three times to wave to the crowd, causing people to surround his car, and then give him hugs and high-fives.

In a Haïti-Libertè editorial on May 8, Berthony Dupont writes, “This immense mobilization has reinforced the determination of the Haitian people to dismantle the machinations of this [Michel Martelly] regime.”

The Associated Press on May 8 comments, “Aristide’s supporters have wondered if there are political motivations behind the revived [Dominique] case.” AP then speculates, “an open case against Aristide … could make it difficult” for his party, Fanmi Lavalas, to run candidates in elections that the U.S. ambassador has announced will take place later this year.

Fanmi Lavalas is so immensely popular that the only way the Haitian bourgeoisie has managed to keep the party from winning elections is by keeping it off the ballot.

These elections will take place, even though Haiti has been under military occupation by Minustah, the United Nation’s so-called Stabilization Mission in Haiti, since it took over from the U.S., French and Canadian armies in 2004. It is not a cheap operation.

Minustah currently has 6,681 soldiers and 2,676 police agents stationed in Haiti; its budget is $677 million for the 2012-2013 fiscal year. During the nine years the U.N. has run this operation, the organization has spent more than $7 billion on it.

Popular anger has been growing against the U.N.’s occupation, especially since it became clear that Minustah’s troops introduced cholera into Haiti. Since most Haitians have no access to potable water or public sanitation, the cholera epidemic has cost more than 8,500 lives and sickened more than half a million people.

While the big business media’s coverage about the devastating earthquake that destroyed much of Port-au-Prince on Jan. 12, 2010, has faded, more than 300,000 families are still living in tattered tents and under ripped tarps. The streets have been cleared of debris, but that’s about it.

Homes, stores, schools and hospitals are still housed in temporary facilities and rubble is still piled high. According to the Office of the Special Envoy to Haiti to the U.N., only half of the donations promised in 2010 have been delivered, and much of this money has been spent in the countries which “donated” it, says Le Monde Diplomatique’s May issue.