Taken from a May 1 audio column at prisonradio.org 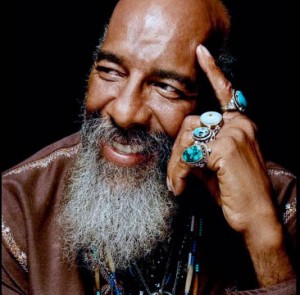 With a voice that seemed equal parts grit and sand, Richie Havens was an original.  Although known to the industry and deejays as a folk singer, anyone who listened to him — both that magical voice and his frenetic guitar playing — knew instantly that he was much, much more.

To most fans, his performance at the famous 1969 upstate New York Woodstock Music Festival was their introduction to his raspy, soulful sound.

But, like rare musicians, some of his best work wasn’t that which sold the most, or made its way to radio.

His was the voice that sang the eloquent anguish of the Ku Klux Klan, with the throaty lyric: “He who rides with the Klan, is a devil, and not a man…”

Think of folk singers — or any singers for that matter — who sing of America’s homegrown terrorists.  Other than the Black British reggae band, Steel Pulse, I can think of none.

Richie Havens did so with passion, brilliance and an eerie raw beauty.

Richie Havens died on April 22 at age 72 of a heart attack.

Abu-Jamal is a political prisoner at SCI Mahanoy in Frackville, Pa.