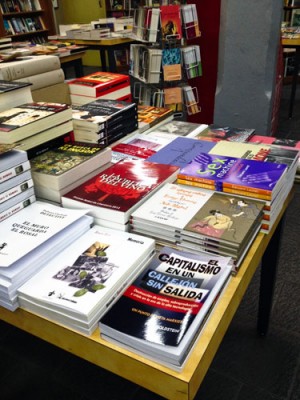 Spanish version of book on sale at U. of Puerto Rico.

Fred Goldstein, author of the recently published work “Capitalism at a Dead End” and a member of the Secretariat of Workers World Party, spoke about the book to a full house at the Inquiring Mind bookstore in New Paltz, N.Y., on April 12.

Students and community activists from the anti-war and anti-fracking movements in the Hudson Valley heard Goldstein elaborate on the book’s thesis that the capitalist system is no longer able to revive itself through the normal processes of the market.

Citing the enormous development of labor-destroying high technology over the last 30 years, including computerization and robotization, Goldstein showed how mass unemployment and low wages are now a permanent feature of the capitalist system.

A lively discussion followed the presentation with questions ranging from how the unions can fight back to what the implications are for education, as well as the question of the viability of the system of private property itself. Goldstein concluded with the idea that while the political atmosphere right now is dominated by reactionary bourgeois ideology, the deteriorating conditions of the multinational working class will force the development of a new consciousness to fight back against intolerable conditions.

The Spanish-language version of the same book, “Capitalismo en un callejón sin salida,” has received an enthusiastic reception in Mexico,  Panama and Brazil, where Marxist discussion groups are using it. Most recently it is finding readers in Puerto Rico, where copies are displayed in La Tertulia bookstore across the street from the University of Puerto Rico in Rio Piedras, San Juan.

Marxist leaders have written favorable reviews in Spanish and Portuguese, which have helped build the reputation of the book. The reviews can be found in English or in the original language at lowwagecapitalism.com.

World View Forum, the book’s publisher, has entered the Spanish-language version in the Premio Libertador al Pensamiento Crítico competition, which awards a prize for books of critical thought published in Spanish in 2012. The contest is run by the Popular Power Ministry of Culture of the Bolivarian Government of Venezuela.