The following press statement was released by Witherspoon, president of the Baltimore chapter of the Southern Christian Leadership Conference.

Next Saturday morning, many of us will mark the 45th anniversary of the Poor People’s Campaign that Martin Luther King inspired, but did not live long enough to lead, by marching from Baltimore to Washington, D.C. 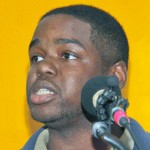 On May 11, the families of young Black and Brown people who have been killed by police will link arms with poor people, immigrant workers fighting for their rights, students, Walmart workers, union members, unemployed people and Occupy Wall Street activists, and walk 40 miles south down the highway to Washington, D.C.

We will occupy Freedom Plaza on Pennsylvania Avenue, a few blocks away from the White House and down the road from the Capitol. There we will erect a big tent and convene a People’s Power Assembly.

We are doing this to bear witness to the truth, and to help spark the social revolution that Dr. King prescribed in the months before his death.

Dr. King often said that truth crushed to earth will rise again. The brutal truth is that the powers that be are waging a war against virtually everything that Dr. King fought and died for.

Fifty years ago, on the steps of the Lincoln Monument, King shared his dream with the world. Today more and more of us are living in a nightmare.

Anyone who thought that having an African-American family or a Democrat in the White House would negate the urgent necessity for a social revolution has long awoken from that dream.

Our young people are more likely to be in prison than in a job.

Poverty, unemployment and desperation are more widespread today than they were when King was alive. The pauperization of the population is the biggest crisis today.

The banks got bailed out after the 2008 global financial crash, and the stock market has soared through the roof. But for the rest of us — the people that Occupy Wall Street calls the 99% — there’s nothing but economic terrorism in the form of unemployment, evictions, foreclosures, low wages and cutbacks.

The 1% have never been richer, greedier and more determined to eliminate, privatize or otherwise destroy every program that is helpful to the poor.

Wall Street has ordered the politicians and the corporate media to justify the war against the poor.

We’ve been told that the cutting of Social Security, health care and unemployment benefits and the closing of hospitals, schools and post offices are being forced upon us by harsh economic realities.

We’ve been told that there’s no point in proposing a real jobs program because we can’t afford one.

These things are presented to us as though they were inarguable facts. They are not.

They are absurd and cruel lies put forward by the 1% in defense of a social and economic order that puts profits and greed before people’s needs. These lies are meant to demoralize us and persuade us that it’s useless to fight for a world based on equality, justice, solidarity and love.

These lies, and the 1% whose interest they serve, must be defeated.

When King proposed the Poor People’s Campaign in 1967, he said that a revolution of values was needed, one that would transform a profit-centered economy into a people-centered one.

We will be marching on Saturday to ignite that revolution.