New York — An inspiring and electrifying meeting was held at the Solidarity Center in New York City on April 25 featuring Mariela Castro Espín, the director of the Cuban National Center for Sex Education (CENESEX) in Havana, Cuba, and a deputy of the Cuban parliament, the National Assembly of People’s Power. The meeting was sponsored by the International Action Center. Due to security concerns and limited seating, it was an invitations-only meeting. 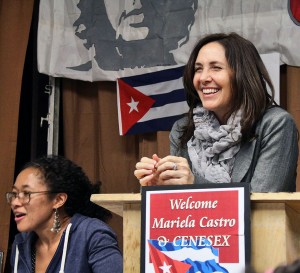 The multinational, multigenerational crowd — which included members of the LGBTQ+, Latin American, and African-American communities — was moved to tears by the momentous gains in Cuba, described by Castro Espín, in combatting homophobia, transphobia and sexism, as well as racism. Castro Espín stressed that these issues are, above all, class issues, and that her country continues to fight for equality on all levels. She also praised the efforts of the U.S. activists in the crowd, saying she felt very much at home with those at the meeting.  Pro-Cuban revolutionary posters and banners encircled the office.

Comments from the floor showed the depth of respect, love and solidarity for Castro Espín and the Cuban revolution. Lucy Pagoada of Honduras USA Resistencia described how the Cuban revolution served to inspire the resistance in Honduras and throughout Latin America to continue, and the exciting integration and unity of those struggles.

Nieves Ayress from La Peña del Bronx, who survived torture under the fascistic Pinochet regime in Chile during the early 1970s and Marina Diaz, a Guatemalan activist from the May 1 Coalition also paid tribute to Castro and the Cuban revolution.

A member of TransJustice, a program of the Audre Lorde Project that fights for the rights of transgender and gender-non-conforming people of color in the U.S., said that CENESEX seemed like a “paradise” for their constituents. Among many projects undertaken in support of the transgender community in Cuba, Castro Espín and CENESEX pushed for legislation allowing transgender people in Cuba to receive hormones and gender reassignment surgeries free of charge. The law was passed in June of 2008.

Solidarity messages were also delivered from Leslie Feinberg, a member of Workers World Party and a world-renowned author and activist for LGBTQ+ rights, and IAC founder and former U.S. attorney general, Ramsey Clark.

Teresa Gutierrez, IAC co-director, urged everyone to “get on the bus” for a June 1st protest in Washington, D.C., in support of the Cuban Five, five Cuban heroes unjustly imprisoned in U.S. federal prisons for attempting to protect their country from terrorist attacks. See thecuban5.org for more information and call 347-201-3728 for $5 round-trip bus tickets from New York to Washington, D.C.

Gutierrez went on to say, “The LGBTQ community here has made great strides and has even won the right of same-sex marriage in some states in the U.S. But what socialist Cuba has done for LGBTQ people has gone much further and is much deeper thanks to the building of socialism there.”

Castro Espín is also a member of the Direct Action Group for Preventing, Confronting, and Combatting AIDS, and director of the journal, Sexología y Sociedad.  She was denied the right to travel to Philadelphia by the U.S. State Department to attend the Equality Forum 2013 Summit, a May 2-5 global LGBTQ+ conference, where she was scheduled to receive an award.

Cuban diplomats are denied the right to travel beyond a 25-mile radius from within New York without permission from the U.S. government, another example of more than 50 years of U.S. government hostility exhibited against the sovereignty of the Cuban Revolution.

The writer, a LGBTQ+ activist, gave a welcoming to Castro Espín at the meeting.