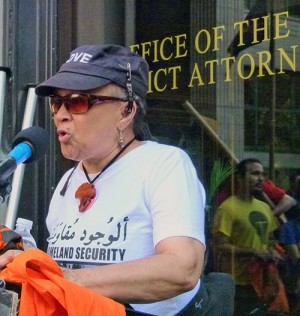 An award-winning journalist and former Black Panther Party member, Abu-Jamal spent nearly 30 years on Pennsylvania’s death row falsely accused of killing a Philadelphia police officer.  When a decades-long, global movement succeeded in winning his release from death row in Dec. 2011, Abu-Jamal was moved into general prison population to serve a life-sentence without parole.  Today’s events were dedicated to broadening and strengthening this movement in order to win his release, with the understanding that life in prison for an innocent man is also a death sentence. 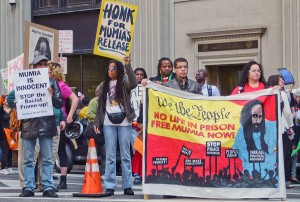 April 24 also marks the anniversary of the passage of the Antiterrorism and Effective Death Penalty Act, signed into law in 1996 by President Bill Clinton.  By placing stricter time limits on appeals, the AEDPA had a seriously negative impact on the rights of prisoners like Abu-Jamal to use the law of habeas corpus to challenge death penalty convictions before the U.S. Supreme Court. The act also gave that court greater leeway in deciding whether or not to hear appeals of capital cases.

Courts on federal, state and local levels have all acted to severely limit Abu-Jamal’s rights to appeal his conviction, often reversing previous rulings when his case came before them. When the death sentence was eventually lifted in 2011, DA Williams blocked Abu-Jamal’s right to a resentencing hearing that could have opened the door to introducing new evidence leading to his release.

The midday rally greeted passing cars and pedestrian traffic with colorful banners and signs urging drivers to “Honk for Mumia.”  The response was deafening.  Many people unfamiliar with the decades-long case stopped for information.

Monica Moorehead, with the International Action Center, commented on Abu-Jamal’s writings on international struggles from Palestine to Venezuela.  She noted that the recent bombing at the Boston Marathon was a direct result of the U.S. global policy of endless wars in Iraq, Afghanistan, Pakistan and now Syria.  Moorehead stated, “Here in the belly of the beast, police brutality and terror in cities like Philadelphia and Newark, N.J., go hand-in-hand with rising levels of poverty.”

Shujaa Graham, one of six people released from death row in California when his conviction was overturned in 1981, spoke on the role that police and prosecutorial misconduct played in his case.  Framed for the murder of a prison guard, Graham stated, “I’m here today not because of the criminal justice system but despite the criminal justice system.”  He credited the “desire, dedication and determination” of student organizers who came to his defense for his release.

Later in the day, protesters marched from a subway stop and a car caravan drove to the site of an evening rally at North Philadelphia’s historic Church of the Advocate, where around 200 people gathered to kick off a Campaign to Free Mumia.

Many youth from Philadelphia’s African-American communities were in the audience leading Drew Brown, one of the co-chairs, to call for them to join the movement noting, “If Mumia was here as a youth he’d be leading this movement.” Several young activists took turns chairing the evening program.

Speakers included Dr. Suzanne Ross with the New York Free Mumia Coalition, who gave an update on the international movement in support of Abu-Jamal. Johanna Fernandez, with Educators for Mumia Abu-Jamal, introduced a new campaign calling for a million signatures demanding Abu-Jamal’s release.

Pam Africa, minister of confrontation with the MOVE organization, gave a brief history of the movement for Abu-Jamal including the historic march and rally of 10,000 people in Philadelphia in 1995 that forced then Gov. Tom Ridge to back down from carrying out an execution.  Africa thanked the IAC for initiating the 1995 protest.  She also spoke on an international rally and outpouring of Millions for Mumia in 1999 that included an 8-hour work stoppage by longshore workers at West Coast ports in support of his freedom.

Recording artist and music promoter Terrance Tykeem spoke of his experience from four years in prison that led to writing his book, “Guilty by Reason of Arrest.”  Tykeem denounced the school-to-prison pipeline stating: “The U.S. incarcerates more people than any other nation on the planet — the majority, people of color.  The system has a target on the backs of our kids.”

Stephen Vittoria, producer and director of the documentary film, “Mumia:  Long Distance Revolutionary,” reminded the audience that in 1970, as a young member of the Black Panther Party, Abu-Jamal spoke at the Church of the Advocate after returning from Chicago to investigate the police murder of Fred Hampton. Vittoria described how the film, which covers Abu-Jamal’s history as a political activist and writer, is slowly starting to “change the conversation” on how he is portrayed by mainstream media. The movie is set to open at the Ritz at the Bourse in Philadelphia on May 3.

Professor and activist, Marc Lamont Hill, who co-authored the book, “The Classroom and the Cell” with Abu-Jamal, stated that “life in prison for a person like Mumia is a death sentence.  Mumia is still with us against all odds and because of our struggle.”

Referring to a brief phone call from Abu-Jamal to the gathering, Hill said: “It’s good to hear from Mumia but it’s not enough. Let’s commit to organizing so that on his next birthday Mumia can be with us to celebrate.”