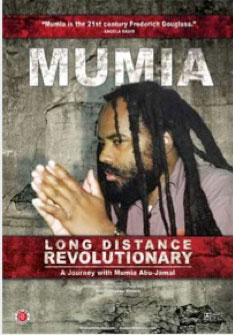 In December 1981, award-winning journalist and political activist Mumia Abu-Jamal was accused of killing a Philadelphia police officer. While professing his innocence, Abu-Jamal was railroaded to Pennsylvania’s death row until December 2011, when a global movement succeeded in winning his release into the general prison population. This movement won’t stop until Abu-Jamal is released from prison.

On Feb. 1, 2013, the full-length documentary “Mumia: Long Distance Revolutionary,” directed by Stephen Vittoria of Street Legal Cinema and distributed by First Run Features, opened its first theater run in New York before sold-out audiences. The film tells about Abu-Jamal’s life as a revolutionary activist and writer, covering his work with the Black Panther Party, support for the MOVE organization and his important contributions as the author of seven books. The movie has had successful runs in theaters in Los Angeles, Oakland, Seattle, Miami, New Orleans, Pittsburgh; Columbus, Ohio; Princeton, N.J.; and Alberta, Canada. It is scheduled to open in Philadelphia on May 3.

It was also set to open April 26 at the Cityplex-12 in the African-American community in Newark, N.J. On April 11, Vittoria was notified that the theater was cancelling the screening. Workers World reporter Betsey Piette spoke with Vittoria about the sudden cancellation.

Workers World: Can you give some background on this screening and how it came to be cancelled?

Stephen Vittoria: The film was set to open April 26 for a week, with discussion of adding another week if we performed well, and we fully expected to. The screening was enthusiastically booked a month before by the Cityplex-12 marketing and promotions manager, who opened up their entire marketing network of media, community organizations, schools and their email base of some 5,000 people for us to promote the film.

They were even setting up a press screening for north Jersey media. That’s almost unheard of for a theater to do. They were setting up feature stories in several newspapers, various blogs and radio stations — a full-fledged marketing assault. They saw this as a real opportunity to play to the people of Newark, a primarily African-American audience expected to respond very well to the film.

No reason was given for the cancellation in the notice we received April 11. I immediately contacted ­Boraie ­Development, co-owners of the theater along with Shaquille O’Neal [retired National Basketball Association player]. They would not return my calls.

I then called Mayor Cory Booker, who was a major player behind the Cityplex-12 opening in downtown Newark. His office promised a statement, and then we got nothing but silence from them. I wasn’t questioning Booker about the theater making a business decision to cancel. I wanted his response about the people of Newark once again being held under the thumb of the corporate and wealthy elite who are keeping them from a film the people are clamoring to see.

WW: Do you believe this was a simple “business decision”?

SV: No. As a documentary, our film was doing very well. We have had sold-out shows in major cities, including New York where we were number three on the charts, and Los Angeles where we were number one. Considering that only four of every 99 documentaries produced even make it to a theater, this has been a successful run.

In a city like Newark the film stood an even better chance because the vast majority of the audience would be African American and Latino/a. I interviewed Mumia about the cancellation and he responded, “What is happening is really a double tragedy because these communities are prevented from seeing a story which is really about their own lives and their struggles and the struggles of their fathers and mothers.”

Ultimately Mumia’s story is Newark’s story. Normally the Cityplex-12 would be showing violent, exploitative films to their audiences. If there was a film that could have made a difference to their audiences, this was the one. This may be the reason they didn’t want [the African-American and Latino/a audience] to see it.

WW: What more have you learned to explain the cancellation?

SV: Several days after we received the notice, community activist Larry Hamm of People’s Organization for Progress spoke with the theater manager, who told him it was a “simple, cold business decision.” They never told us this or gave this excuse to our distribution company. They can’t say the film won’t make money when it has sold out in other cities.

The marketing manager, who worked freelance for Cityplex-12, told us it was a decision made by the theater’s ownership, including Shaquille O’Neal, whose personal manager and confidant is an ex-cop. The marketing manager was summarily fired by the theater because he told the truth. He won’t corroborate this, but it is my very strong opinion this went down for political reasons associated with Mumia Abu-Jamal and the Philadelphia Fraternal Order of Police.

This is not going unchallenged. A number of groups in Newark, including POP, will be holding a press conference on April 26 in front of the theater. They plan to do some rolling protests around the theater to try to get the theater to reinstate the film.

Newark is actually my hometown. I was born there, and it was my home base for some 30 years. I’m not surprised by the politics behind this. When I interviewed Mumia, he described this as “the politics of quietude — they don’t want the natives to be restless.”

Mumia said, “When you look at the conditions of Newark, of Philadelphia, of Oakland, the natives have a lot to be restless about. Thirty schools are closing in Philadelphia; 50 in Chicago. If people don’t know their history of resistance, then they can’t see the possibility of participating in those kinds of struggles.

“That’s the story of ‘Long Distance Revolutionary’ and they don’t want that story told. That they don’t want people to see the movie is kind of a sign of our success. What they fear most is our reaching people, moving people and telling them a story about a life of resistance to the empire.”

WW: What impact might the Newark cancellation have on Philadelphia’s May 3 run?

SV: Frankly, I hope it has no impact. I think Philadelphia will be a very successful run. A lot of people dedicated to justice there will want to come out; [they’re] eager to see Mumia’s amazing story.

For tickets and film information for Philadelphia, visit Mumia-themovie.com.