A wonderful civilian-military ­parade capped the inauguration of Nicolás ­Maduro in Venezuela on April 19. Maduro took the oath of office in the National Assembly as constitutional president for the period 2013 to 2019.

Some 61 international delegations were present, including many heads of state, not only from Latin America and the Caribbean but from as far away as Iran and the Sahrawi Republic. Among them was Riad Malki, chancellor of Palestine, who two days earlier was in the country for the founding of the Committee for the Defense of the Rights of the Palestinian People. 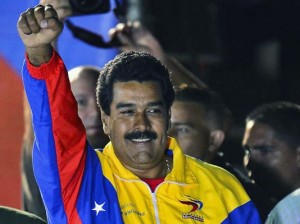 April 19 was a very significant day: the 203rd anniversary of the proclamation of Venezuela’s independence.

The dynamic, colorful and diverse parade also honored the life of Supreme Commander Hugo Chávez. Its participants reflected the current situation in Venezuela: the armed forces together with the people, who since the election have been acting together to defend the Bolivarian Revolution from a rightist coup attempt by the pro-imperialist oligarchy, which backed the losing candidate, Henrique Capriles.

Leading the march were popular contingents and delegations from the different social “missions,” led by Indigenous peoples. They were followed by various divisions of the Bolivarian Armed Forces, including a contingent of women. During the ceremony, the armed forces handed over command to President Maduro.

The parade ended with a display of the latest weaponry purchased by Venezuela for its defense. It was a powerful message, not only to the opposition but to U.S. imperialism: Venezuela depends not only on its armed forces for defense, but also on its people.

Gov’t in the streets, a revolution in the Revolution

During his inauguration speech, President Maduro outlined his political agenda: government in the streets, a revolution within the revolution, socialist efficiency. If the imperialists were looking for conciliatory words, they instead found a speech that called for deepening the revolution on the path to socialism, with neither illusion nor bourgeois aspiration.

“My roots are in the working class [and are] rebellious. I also come from the neighborhoods,” said Maduro. He traced plans to end the corruption that has seeped into some levels of government, to totally eradicate poverty, to improve the economy and perfect all “missions” — the many state-sponsored programs dealing with education, health, housing and nutrition. He also addressed ending the sabotage of the electrical system by bringing it under National Security.

“The Revolution of Socialist Efficiency,” he said, would combat bureaucracy, fight corruption and apathy.

“Forward to the Great Revolution of the People’s Power for the construction of the socialist way of life. … We are convinced that only socialism can overcome inequalities.

“Only with the people can we do it. In socialism, in equality, fellowship, it is possible to live in humanity, to live well. That is why I call for the revolution of the revolution. We will go forward energetically, to do whatever needs to be done and to correct what needs to be corrected.”

Two days later he named his new cabinet, which will have as its priority an assessment of the entire system at the neighborhood and street level. Its task is to establish direct communication with the people in order to put into motion the Homeland Plan, which was designed by Chávez as his “testament” to deepen the revolution.

In subsequent articles we will examine in greater detail the cabinet and its functions. Chávez laid out its functions in his famous “Golpe de Timón” (Change of Course) speech at an important Council of Ministers’ meeting on the new cycle of the Bolivarian Revolution last Oct. 20.

During that meeting, Chávez urged his cabinet to conduct a profound self-criticism to correct errors so as to take on the difficult task of building socialism in a country where the oligarchy is present and exploits the broad freedoms they have to try to undermine people’s power.

Chávez set the standard of performance expected from the cabinet. He strongly emphasized the lack of development of communes, which President Maduro will now address as a fundamental aspect of his program.

Communes, as Venezuelan law decrees, are “a local entity where citizens in the exercise of the Peoples’ Power, exercise full sovereignty and develop active participation through forms of self-government for the building of a communal state under the framework of a democratic and social state of law and justice.” (www.me.gob.ve)

The Bolivarian Revolution faces many challenges, including attempts at destabilization internally by the oligarchy and externally by U.S. imperialism. However, it seems that the new president’s call to the people in the streets, encouraging collective leadership and the active and organized participation of the people in deepening the revolution on the road toward socialism, is going in the right direction.

Meanwhile, it remains to the Venezuelan revolutionaries to draw from recent events the lessons that sharpen the process of transition to socialism, a task bequeathed by Chávez and seconded by the majority of the people. Revolutionaries worldwide, especially in the U.S., which is the source of the major global terrorist threat, will have to defend this process that is crucial for us all.