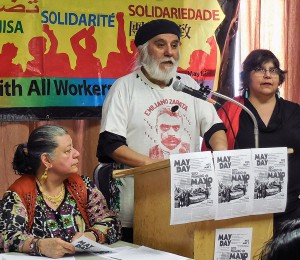 Chilean exile and profound internationalist Victor Toro will be in court April 25 in New York to continue his struggle to win asylum and avoid deportation to Chile. He and his support committee ask progressives in the region to come show solidarity with him.

Toro spoke of this at a meeting on April 14 at the Solidarity Center in New York. He presented his own case, however, as another example of the broad struggle for the rights of what he said were 20 million undocumented workers in the U.S. and another 30 million “in the pipeline.” Worldwide, he said, there were 250 million workers either employed or seeking jobs outside their home countries.

For Toro and for the May 1st Coalition for Worker & Immigrant Rights, the fight is not only for full rights for the 11 million undocumented workers the government admits to, but for all the workers forced to seek work outside their homelands.

Toro was a leading activist in the Chilean Movement of the Revolutionary Left before and after the U.S.-backed fascist, Gen. Augusto Pinochet, overthrew the elected Salvador Allende government with a coup in 1973. Toro explained how his asylum case was not just a defense of his right to stay with his family in the Bronx. His defense, he said, has managed to accuse the U.S. government for its crimes against the people of Chile in its appeal of the court’s decision.

The struggle will continue in court on Thursday, April 25, at 9 a.m. at 26 Federal Plaza in Manhattan on the 14th Floor in Courtroom 5.