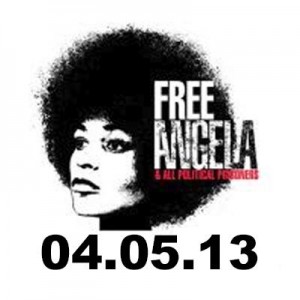 The power of the recently released film, “Free Angela Davis and All Political Prisoners,” directed by Shola Lynch and now showing at select AMC theaters around the country, is its ability to place Angela Davis’ trial in proper historical context. The film is not only about the arrest and trial of one political activist, but a powerful portrait of the political climate of the early 1970s.

The global movement that led to the 1972 acquittal of this African-American revolutionary took place during the political upsurge in the late 1960s and early 1970s. As I was watching the film I thought: “What young radical today cannot but be inspired by the sight of Black Panthers in berets brandishing shotguns at the California state Capitol in Sacramento in 1967? What young Occupy Wall Street militant is not inspired by the period’s many scenes of defiant youth battling the police in the streets?”

Also, during that period of upsurge there was the socialist camp, including the Soviet Union and the German Democratic Republic (GDR), which have since had their revolutions overturned and capitalism restored. Despite a certain degree of privilege that a sector of workers was enjoying in the U.S. at the time, national liberation struggles here and worldwide were on the rise.

I first learned of Angela Davis when I was 14 years old, looking for information about communists in the U.S. at the local library in my small town in rural Ohio. Davis had been the vice presidential candidate of the Communist Party in 1980 and 1984. I found pictures of her with her large afro, her leather jacket and her fist raised high in the air.

In the 1970s, people who were not remotely involved in leftist politics knew very well who Angela Yvonne Davis was. They may not have known the details of her case or had a clear understanding of her political views. But they knew that she was a militant anti-racist fighter, and they also knew that she was a communist.

In her narration throughout the film, Angela Davis does not back away from the fact that she is a communist. The film tells of how she gave classes on Marxism to the Black Panther Party’s new recruits, and how she joined the Che Guevara/Patrice Lumumba Club of the U.S. Communist Party. The club’s name honored those two great revolutionary internationalists of that period.

Members of this club are shown defending “the right to bear arms” in television interviews and statements. While today the so-called champions of “gun rights” are right wingers and libertarians, in the 1970s the right to bear arms was associated with revolutionaries, inspired by the Panthers, who were defending themselves against racist, genocidal terrorism in the form of the police and the FBI’s Cointelpro.

The film shows the strength of the Black Panther Party and the wider Black liberation struggle. The sight of the huge funerals for brothers George and Jonathan Jackson, where thousands of people are gathered to memorialize these martyred militant revolutionaries, gives a sense of how broadly they were embraced by oppressed sectors of society.

Jonathan Jackson was slaughtered at the age of 17, among others in a Marin County courthouse shootout with police in August 1970. He was attempting to free his imprisoned older brother, George Jackson, a Black Panther leader and one of the three California prisoners known as the Soledad Brothers.

George Jackson was assassinated one year later by guards at San Quentin Prison.

At her trial, Davis is shown triumphantly exposing the racism and sexism of the prosecution, who claimed that Davis had lost her mind while falling in love with George Jackson, and this was supposedly evidence of her guilt. She was charged with conspiring with Jonathan Jackson to free his brother.

While the film focuses on specific aspects of the legal proceedings, it was not the work of brilliant lawyers alone that freed Angela Davis. The fact that millions of people around the world were in the streets supporting her was a key factor in the outcome of the case.

We see global “Free Angela!” rallies that took place in Cuba, Vietnam, the Soviet Union and the GDR. In one touching scene, Angela is interviewed in her jail cell, reading to reporters a letter she had received from a school-aged child.

In 1972, two banners of Workers World Party’s then militant, street fighting youth organization, Youth Against War and Fascism, are prominently displayed in the film. The first banner proclaims “Free the Soledad Brothers.” The second banner contains the phrase, “Free Angela Davis and All Political Prisoners,” the title of the film itself.

Regardless of the many differences between 1972 and 2013, the demand for “Power to the People!” is today evolving into a rallying cry of millions of workers, especially the youth as they battle against racism and imperialism, as well as capitalism itself.