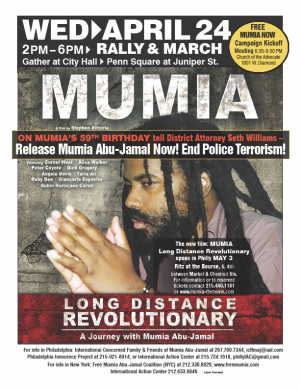 With a rally and a community organizing meeting planned for the anniversary of his 59th birthday, supporters of political prisoner Mumia Abu-Jamal will kick off a campaign to “Free Mumia Now!” on April 24.

Demonstrators will gather from 2 p.m. to 6 p.m. outside the offices of Philadelphia District Attorney Seth Williams near City Hall. Later that day an organizing meeting to broaden the campaign will be held at the Church of the Advocate in North Philadelphia. For information on the event, visit www.freemumia.com.

Williams and his predecessors Ed Rendell, Ron Castille and Lynne Abraham have worked in concert to keep Abu-Jamal on death row despite strong evidence of his innocence in the murder of police officer Daniel Faulkner in December 1981. Since Abu-Jamal’s arrest, the Philadelphia district attorney’s office has been a key player in a broad conspiracy to kill him and now to keep him in prison for life. There is extensive evidence of police, prosecutorial and judicial misconduct in the case.

Rendell and Castille successfully launched political careers based on publicity stemming from the case. Rendell became a Philadelphia mayor, head of the Democratic Party and a Pennsylvania governor. Despite several controversies surrounding his tenure, including his refusal to recuse himself when Abu-Jamal’s case came before his court for review, Castille is still a judge on the Pennsylvania Supreme Court.

Abu-Jamal, a former Black Panther and now a renowned revolutionary journalist and radio commentator, was an outspoken critic of Philadelphia police brutality and a supporter of the MOVE organization.

In December 2011, after decades of massive, worldwide demonstrations, tribunals and other actions in his support, including many in Philadelphia, Abu-Jamal was finally released from death row. He is now in general population in Pennsylvania’s SCI Mahanoy prison in Frackville, Pa., serving a sentence of life without parole.

While celebrating this partial victory, his supporters contend that Abu-Jamal’s life is even more in danger than when he faced the threat of a state-sanctioned death sentence.

On Dec. 7, 2011, District Attorney Williams announced he would halt the state’s effort to execute Abu-Jamal after “discussing his decision with Maureen Faulkner,” widow of the slain police officer. At a press conference that day, Maureen Faulkner effectively called for Abu-Jamal to be murdered while in general population, stating, “I am heartened by the thought that he will finally be taken from the protected cloister he has been living in all these years and begin living among his own kind — the thugs and common criminals that infest our prisons.” (New York Times, Dec. 7)

Faulkner went on to say, “The time before Mumia Abu-Jamal stands before his ultimate judge does not seem that far off.” Pam Africa, spokesperson for the International Concerned Family and Friends of Mumia Abu-Jamal, responded at Temple University on March 30: “Maureen Faulkner was clearly calling for a hit on Mumia. His life is in more danger than ever.”

The state’s alternative option for Abu-Jamal was a new sentencing hearing, but obviously they did not want to face the risk that a new jury might well release Abu-Jamal based on evidence that has surfaced since his 1982 trial, including photographs by independent journalist Pedro Polakoff that clearly expose the lies behind prosecutorial “evidence.”

Abu-Jamal supporters are now launching a major campaign designed to free him from prison and to bring him home, alive, to his family and friends. The efforts include a soon-to-be-released petition drive and promotion of the new documentary film, “Mumia: Long Distance Revolutionary,” which is already enjoying record crowds at theaters in every city where it has been shown.

Against all odds, including the long-standing campaign by the Fraternal Order of Police to stop any pro-Mumia event, “Long Distance Revolutionary” will be shown in Philadelphia starting May 3 at the Ritz at the Bourse. Promoters are urging Abu-Jamal supporters to purchase their tickets now by going online to mumia-themovie.com.