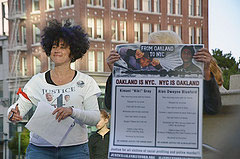 The Justice for Alan Blueford Coalition held a rally of about 150 people in Oakland, Calif., on March 21 in solidarity with the family of Kimani Gray, an African-American 16-year-old who was killed by cops in Brooklyn, N.Y. The coalition members were struck by the similarities in the two police killings. Both young Black men were on their way home with friends, had committed no crime and were victims of stop-and-frisk racial profiling tactics. In both cases, the police officers involved had histories of prior abuse.