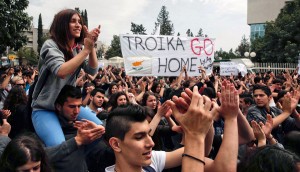 Cyprus is a small island country in the eastern Mediterranean Sea with an economy valued at less than 1 percent of Europe’s total. Yet what has just happened to Cyprus has dire implications for people wherever bankers rule the roost — which is the entire capitalist world.

The big imperialist banks of Europe have forced on Cyprus a plan that, according to the online blog of a British business magazine, would push the country into a “harsh recession” in which the gross domestic product “will shrink by about 10 percent before any hope of recovery.” (The Economist, March 25)

Yet this plan is being hailed as a $13 billion “rescue” and “bailout” of Cyprus’s banking system by the Troika: the European Commission, International Monetary Fund and European Central Bank.

Recent entrants to the European Union, like the Republic of Cyprus — consisting of the southern (Greek) half of the island — have found that being in the EU does not reap the advantages that a common European currency promised. They lost what financial independence they might have had to the Troika — the financial instruments of the enormously wealthy imperialist bankers of Europe.

The people in the Republic of Cyprus woke up to this fact with a shock on March 16 when the newly elected right-wing president, Nicos Anastasiades, announced he had struck a deal with the Troika that would “rescue” the Cypriot banking system, which was supposedly on the verge of bankruptcy.

He would let these European bankers reach into the people’s savings accounts and grab almost 7 percent of the money from every insured deposit, which included all deposits up to 100,000 euros — about $130,000. Larger, uninsured accounts would be taxed even more — almost 10 percent.

The people of Cyprus had not been consulted about any of this.

Nor had the government of Russia, even though Cyprus had become a major offshore banking center for rich Russians. These are the Russians who grabbed up state property for a song after the Union of Soviet Socialist Republics was broken up and capitalism was restored there in the early 1990s. At that time, these robbers were welcomed into the “international community” — meaning the capitalist world — and toasted as great entrepreneurs by the self-styled democratic bourgeoisie of the West.

But increasingly those who once hailed these Russians’ ingenuity in sucking the wealth out of formerly state-owned enterprises now see them as competitors, especially as the struggle for markets intensifies. So they don’t mind throwing the Russian depositors under the bus if that will clinch the Cyprus deal.

What followed the Cypriot president’s announcement was a social explosion. Unable to draw much money from their savings to pay for rent, food and other necessities because the government had ordered all banks closed, the people filled the streets in protest. The result was that the Cypriot Parliament voted to reject the deal. Under the pressure of the people, they refused to let the big bankers arrogantly come in and just take what they wanted from personal bank accounts.

But this wasn’t the end of the matter. The bankers figured out a new way to get their $13 billion — and to set a precedent for other countries that might think of resisting their diktats. On March 25, they came up with a new plan, again agreed to by flunky President Anastasiades. This time, the plan wouldn’t need parliamentary approval, they said.

Rather than impose a tax on all deposits, they would break up one of the larger Cypriot banks, called Laiki, which handles many of the offshore accounts. The large depositors, mostly Russians, could expect to lose about 35 percent of their funds, which would in effect be confiscated by the Troika.

The capitalist world is not a collection of equals. In some countries, the capitalists have grown rich and powerful through centuries of industrial development made possible by exploiting the workers at home and super-exploiting territories abroad that they conquered and colonized.

The immense wealth of the ruling class in these imperialist countries is concentrated in the banking system. The size and populations of these countries are not the decisive factor. While the United States, Britain, Germany and France have dominated the global banking system, smaller countries like Belgium and the Netherlands also grew rich through colonial pillage and are part of the imperialist club.

The present world capitalist economic crisis, which began in the U.S. in 2008, particularly hit hard those countries caught in the net of the powerful imperialist banks.

Europe as a whole is now in the grip of a second-dip recession, with intractable unemployment. When people aren’t working, they can’t buy. Without customers, businesses fold left and right, and loans go into default, leaving many local banks, particularly in poorer countries, in a precarious position.

If the bankers can succeed in putting over this unprecedented expropriation of bank deposits in Cyprus, there can be no doubt that they will take it on the road, squeezing every penny out of other countries in order to keep the imperialist banks stuffed with cash, even as the capitalist crisis deepens.