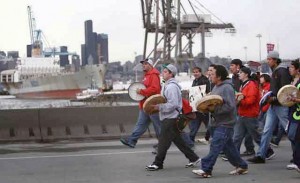 Demonstrators and supporters from the Native environmental and justice organization, Idle No More, marched 3.8 miles and rallied at SSA Marine in Seattle on March 21. Many marchers were from the Lummi Nation, who are threatened with environmental devastation under SSA Marine’s plans to build the largest coal port in the country on their land at Cherry Point near the Canadian border. Demonstrators stopped and spoke to International Longshore and Warehouse Union Local 19 members at their hall along the march route. The proposed coal port on Lummi land would receive 18 coal trains a day, each about a mile and a half long.