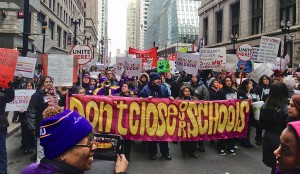 Thousands of teachers, parents and community members rallied on March 27 in the Chicago downtown area to protest Mayor Rahm Emanuel’s plan to close 54 public schools — in the predominately African-American and Latino/a communities —  to erase a $1 billion deficit. The rally began in Chicago’s Daley Plaza and was followed by a march to City Hall that ended at the Chicago Public Schools headquarters.

Teachers formed a human chain outside Chicago’s City Hall. Several dozen demonstrators, most of whom were CPS teachers, peacefully linked their arms together to show the unity within the Chicago Teachers Union, blocking the streets.  After a few minutes of staying in place, the Chicago Police Department removed the demonstrators, arresting some of them. 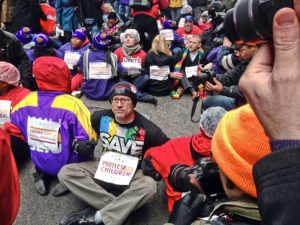 A protester stated, “We won’t let Rahm Emanuel and Barbara Bennett close our schools.”  Chants included “Schools, not jails!”  Some of the youth angrily complained that their schools serve as vital after-school recreation centers.

Karen Lewis, president of the Chicago Teachers Union, told rally participants: “For months we have heard Emanuel and CPS CEO Barbara Bennett claim to have a plan to help our children. I said, ‘What plan!’ They claim to care about our children, but all they care about is the bottom line. We demand that Chicago Mayor Rahm Emanuel stand next to Chicago students, not against them.”