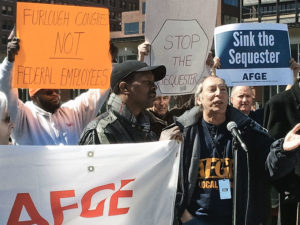 The American Federation of Government Employees called a national day of protest March 20 targeting the federal government-imposed sequester, which will furlough more than a million workers across the country for 7 to 22 days. Rallies were held in 115 cities, from San Diego to Washington, D.C., and many cities in between, like El Paso, Texas; Oklahoma City; St. Louis; Chicago; and Battle Creek, Mich.

“Who should be furloughed? Congress! When should they be furloughed? Now!” rang out at the Department of Labor headquarters in Washington, D.C., where hundreds of unionists held a noonday picket. A second protest was held at the Social Security offices.

AFGE workers from many agencies and departments were joined by members of American Federation of State, County, and Municipal Employees and many other unions, as well as community groups like the Alliance of Retired Americans.

Another popular chant was “Sequestration kills communities! Stand up, fight back!” This refers to the fact that these workers will have much less money to spend locally. For instance, it’s estimated that for every 20,000 workers furloughed, 60,000 will be affected. (Union City, online newsletter of the Metropolitan Washington Council AFL-CIO, March 21) An AFGE press release pointed out that due to furloughs, the government will actually lose revenue when, for example, user fees won’t be collected at national parks. (afge.org, March 14)

The AFGE rally on March 20 in Philadelphia included speakers from AFGE locals, the Philadelphia Unemployment Project and Fight for Philly. They and others argued that the cuts not only harm government workers, with one-day furloughs that equal a 20-percent pay cut, but that sequestration also harms communities in many ways.

Joseph Piette contributed to this article.