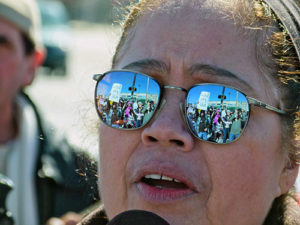 Rosaura Torres, herself a victim of police brutality and an organizer of the rally.
WW photo: Joseph Piette

Community members and activists marched and rallied in support of Aida Guzman on March 9 on Lehigh Avenue between 5th and American Streets in the heart of Philadelphia’s Puerto Rican community. Guzman suffered police brutality by a Philadelphia cop after a Puerto Rican Day Parade in 2012. The judge who heard the case, who was married to a Philadelphia police officer, ruled the cop “not guilty,” despite video proof to the contrary. The Aida Guzman Justice Committee, which called the event, circulated a petition demanding an investigation and calling on the American Civil Liberties Union of Pennsylvania and the Justice Department to intervene.