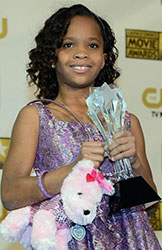 Never let it be said that I don’t have a sense of ­humor, for those who know me will attest that I can be as silly as a goose.

I find laughter healing and restorative.

And yet, some attempts at comedy leave me cold, especially when the butt of the jokes are Black people or children.

Which brings me to the present dust-up surrounding the adorable little girl, Quvenzhané Wallis, the leading actor in “Beasts of the Southern Wild,” a film on Katrina-era New Orleans.

According to published reports, the satirical news journal, The Onion, referred to the child with an epithet that, shall we say, rhymes with the word ‘runt’.

The Onion promptly issued its mea culpas — “our bad, sorry” — but the damage is done.

A child, a brilliant, beautiful little girl no less, is slapped with a word that shouldn’t exist in her 9-year-old vocabulary.

Would the [then] child actress, Tatum O’Neal, ever have been subjected to such a term? What of the pre-teen actress Dakota Fanning?

But in this “post-racial” era, where Black folks are fair game once more and silenced by the shimmering spectacle of a Black family in the White House, a Black child may be slimed by the most sexist, most objectifying of terms.

Misogyny in embryo. But, don’t worry. It’s just a joke. Can’t you take a joke?