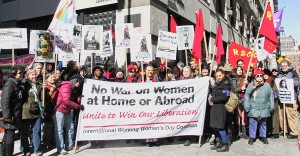 “The women united will never be defeated!” and “¡Sí, se puede!” were two of the popular chants during a spirited two-hour speakout at the Triangle Shirtwaist Factory Fire Memorial in Manhattan on March 9. The rally was organized by the International Working Women’s Day Coalition, comprised of women activists of all ages, nationalities and gender expressions from community and political organizations, unions and schools, united around the theme that “every issue is a woman’s issue.”

The speakout began and ended with Lallan Schoenstein, a retired staff member of a garment worker union, and Sue Harris from People’s Video Network, reading dozens of names of the 146 workers — mainly young, Jewish and Italian immigrant women — who tragically lost their lives in a March 25, 1911, fire in a garment factory when the bosses purposely locked the emergency exits. Some of the workers jumped to their deaths in an attempt to escape the flames. This massacre and the protests in response to it led to a surge in union organizing for better working conditions and pay.

Leaving the speakout and taking to the streets.
WW photo: Brenda Ryan

The fire came just a year after the 1910 women’s socialist conference in Copenhagen, Denmark, which declared March 8 as International Women’s Day, to be commemorated worldwide. Activists likened the 1911 tragedy to the one that took place in a factory in Bangladesh last November, when a fire claimed the lives of more than 100 mainly women garment workers, superexploited by Walmart and other clothing conglomerates.

Many carried signs saying “I am Harriet Tubman, a freedom fighter” in recognition of the March 10 centennial of Tubman’s death. Special programs on this anti-slavery fighter are scheduled for a high school in Brooklyn’s Bedford-Stuyvesant community on March 16 and the Bronx on March 24. Sharon Eolis, a Solidarity Center organizer and retired nurse, spoke on “General” Tubman’s contribution as a nurse during the Civil War.

Dolores Cox, an International Action Center organizer, read a message of solidarity from political prisoner and people’s lawyer, Lynne Stewart, who is suffering from cancer. A national petition is demanding a compassionate release for her from prison. Other women political prisoners mentioned during the speakout were Dr. Aafia Siddiqui, CeCe McDonald and members of the MOVE 9.

Christine Hilo from Gabriela-USA and Monica Moorehead from the Women’s Fightback Network co-chaired the speakout. Gabriela and WFN are member organizations of the International Women’s Alliance, a global formation that calls for the liberation of women from all forms of social injustice — like racism and attacks on reproductive rights rooted in capitalist oppression — and an end to the imperialist occupations of Haiti, Palestine, Puerto Rico, Africa and elsewhere.

Following the speakout, rally participants marched to the WORD rally on violence against women in Washington Square Park. There, Brenda Stokely, a Million Worker March Movement leader and IWWD Coalition representative, spoke on the upcoming March 16 tribute to Harriet Tubman event in Brooklyn, where students are scheduled to perform a skit depicting Tubman and Civil Rights hero Rosa Parks meeting for the first time.