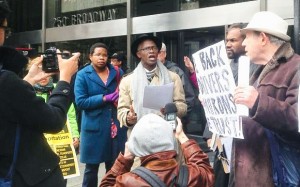 Two weeks after the school bus strike ended here, parents were still trying to guarantee satisfactory bus service while protecting the rights of bus drivers and matrons in Amalgamated Transit Union Local 1181. To do this, Parents to Improve School Transportation organized a delegation of parents and supporters to deliver a message to City Council Speaker Christine Quinn on March 1, asking her intervention to protect these rights.

PIST activist Johnnie Stevens, who spoke at a news conference outside Quinn’s office at 250 Broadway, told WW that he delivered the letter to Quinn through her executive secretary, Barbara Scafiddi.

Local 1181 decided to end its strike after five Democratic Party mayoral candidates — Quinn is one — promised that if elected mayor they would restore job protections for the workers — the main issue of the strike. The parents are calling for them to deliver their support now to the workers and children, not after a future election.

The challenge prompting PIST’s news conference and letter was that two companies are running buses with “replacement” drivers and matrons, rather than hiring the experienced union members who worked there before the strike. PIST’s letter to Quinn, which is excerpted below, explains this issue:

“[T]here are dozens of replacement drivers taking the jobs of experienced drivers and matrons at the Rainbow/All American/Citywide companies owned by Mrs. Ray L. Fouche and at Tufaro Buses owned by Joe Tufaro.

“We are aware that the Department’s Contracts Division authorized companies to hire ‘an extra driver in lieu of an escort’ for ‘one month or until the strike has ended, if that is sooner.’ There is no excuse for students, especially those who use wheelchairs, to receive second-class treatment now that the people with expertise are available to work.

“In the interest of safety, efficiency and a return to normalcy, we say the fully certified, experienced, familiar matrons and drivers should be reassigned to the routes they had before the strike. In the case of students with IEPs [Individualized Education Programs], we know that the service of transportation with an attendant who is trained in the needs of students with disabilities is a mandate under civil rights laws such as IDEA [Individuals with Disabilities Education Act].

“The above-named companies’ possible violations of this and other federal laws — such as the Worker Adjustment and Retraining Notification Act (WARN), which requires companies with more than 100 workers to give 60-day notice before closing a plant or enacting mass layoffs — must be addressed. New York State has similar laws for companies with 100 or more workers.

“As one of New York’s Democratic candidates for mayor who have expressed support for the school bus union and the importance of seniority hiring, you belong in the lead of an investigation of these violations. As Speaker of the City Council, you are in a position to propose emergency legislation that would give the city enforcement powers, i.e., a WARN Act with teeth.”

The letter was signed by PIST members and other school, community and disability activists, including parents of pupils using Rainbow school buses. n