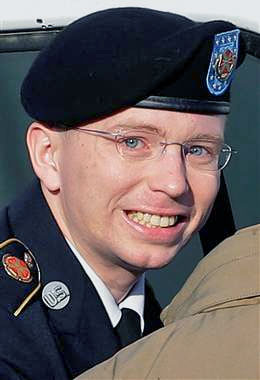 Pvt. B. Manning read a 35-page statement to a court-martial session at Fort Meade, Md., on Feb. 28, in which the whistleblower proudly admitted having released documents and videos that exposed the U.S. military’s war crimes and U.S. government support of corrupt regimes around the world.

One of those videos, called “Collateral Murder” and released through the website WikiLeaks, reveals a July 12, 2007, attack in a Baghdad suburb where the gunner on a U.S. helicopter deliberately targets a wounded Reuters Wire Service photographer and a “good Samaritan” Iraqi who tried to get the reporter to the hospital. Both were killed. The U.S. government has never prosecuted anyone for this clear-cut war crime.

“I began to become depressed at the situation we found ourselves mired in year after year. In attempting counterinsurgency operations, we became obsessed with capturing and killing human targets on lists,” Manning said. “I wanted the public to know that not everyone living in Iraq were targets to be neutralized.”

Some of the material that Manning released included videos of airstrikes in Iraq and Afghanistan in which civilians were killed, logs of military incident reports, assessment files of detainees held at Guantánamo Bay, and a quarter-million cables from U.S. diplomats stationed around the world.

“I believe if the public — in particular the American public — has access to the information” in the reports, “this could spark a debate about foreign policy in relation to Iraq and Afghanistan,” Manning said. (Quotes from thenewamerican.com, March 1)

Manning testified to having contacted the Washington Post in early 2010 about the damning information, but the paper refused to commit to report it. Manning’s calls to the New York Times were not returned. (New York Times, Feb. 28) So the soldier decided to upload the information to the WikiLeaks website. Manning says no one at WikiLeaks coached or pressured for this decision.

By admitting to these disclosures in court, Manning risked future freedom. In effect, this was a “guilty” plea to 10 charges that could carry 20 years in military prison. In addition, the prosecutors in the case announced on March 1 that they intend to try Manning on other charges that, if convicted, could mean life in prison for the hero whistleblower.

In particular, the government wants to pursue the charge of “aiding the enemy.” To the U.S. government, exposing imperialist war crimes to the world’s people is itself a crime that merits the most severe punishment.

On the contrary, the principles derived from the Nuremberg trials of Nazi leaders at the end of World War II dictate that the duty of every soldier is to prevent, stop and expose war crimes, a duty that Manning has heroically carried out.

“They want to scare the daylights out of other people,” Fidell said.

Manning’s trial is slated to begin on June 3 and last for 12 weeks. But it is the U.S. military and government officials who should be tried for their crimes against humanity, not heroes like Private Manning, who exposed them. Free Private Manning now!