Hundreds of students, parents, school workers and community activists protested at a meeting of the Philadelphia School Reform Commission against its plan to close 29 of the city’s 249 schools and privatize many more.

Around 100 demonstrators, mainly students, took over the Feb. 21 hearing, after marching into the meeting with bullhorns and signs chanting, “Our children are not for sale!” They held placard-size pictures of Pennsylvania Gov. Tom Corbett and Philadelphia Mayor Michael Nutter, whom protesters say are behind the commission’s privatization plans.

Chanting, “The SRC is not for me!” protesters then left the building and marched onto heavily traveled North Broad Street. Hundreds more joined them there, bringing traffic in both directions to an immediate halt.

The Feb. 21 event opened three days of formal hearings on the school closings. At several previous public meetings at schools slated for closure, angry students and parents denounced the SRC representatives’ plan. Many called the plan racist, noting that most schools slated for closure are in Black and Latino/a neighborhoods. The vote on the plan is scheduled for March 7.

Members of unions representing school employees, including the Philadelphia Federation of Teachers and Service Employees union 32BJ, representing blue-collar workers, took part in the protests. The SRC plan calls for laying off teachers, nurses and other support staff, and outsourcing the jobs of 2,500 unionized custodians, bus drivers and cafeteria workers. 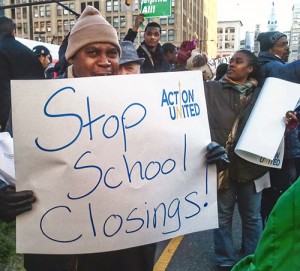 No matter how many of Philadelphia’s public schools end up on the chopping block, one thing is clear: A handful of powerful wealthy individuals and corporations — not the communities most impacted — are making the decisions affecting these schools and the future of education in Philadelphia.

The SRC consists of five appointed individuals — two by the city and three by the state. Corbett, who has majority control over SRC seats, has eliminated billions of dollars in state funding for public schools. The largest contributor to Corbett’s 2010 election campaign just happened to be Vahan Gureghian, founder of Charter School Management Inc., which runs 150 charter schools in nine states.

The SRC answers to big money, not to the Philadelphia City Council and clearly not to the people. In February 2012, it voted to spend more than $1.4 million to hire the Boston Consulting Group for five weeks’ work to design a plan to “decentralize” Philadelphia schools — in other words to privatize them. Again, there was no public input in the decision.

To cover their tracks in case the public asked how a “cash-strapped” district could afford this outrageous sum, the SRC sought private foundation funding to pick up this tab. United Way of Southern Pennsylvania and the William Penn Foundation, claiming the money came from anonymous donors, raised $2.7 million to pay the BCG for their plan.

The BCG plan initially recommended closing up to 60 schools and threatened outsourcing to extract $100 million in concessions from unionized workers. While the BCG plan will butcher district schools, it does nothing to eliminate an alleged $218 million deficit.

William Penn Foundation also gave $15 million to the anti-public-school Philadelphia School Partnership, whose board member, Janine Yass, was one of the private donors who helped the foundation pay for the BCG study. Her spouse, Jeffrey Yass, is a big funder of anti-public school campaigns.

SRC member Feather Houstoun is a former president of William Penn. SRC chair Pedro Ramos sits on the board of United Way. Sanjeev Midha, a trustee on the board of KIPP Philadelphia (online charter schools), is a BCG partner. While suggesting the SRC should fire public school teachers based on test scores, the BCG promotes online schools, which ­often have the lowest student test scores and the lowest teachers’ pay.

The U.S. government paid BCG $7 million during the bailout of General Motors and Chrysler for consultation that resulted in drastic wage cuts and layoffs for unionized workers. Today BCG is spearheading efforts to privatize the U.S. Postal Service and eliminate rural delivery.

In December, several community groups, including Parents United for Public Education and the NAACP, filed a complaint with the city’s Board of Ethics charging that the foundations failed to register as lobbyists after making payments to BCG to influence SRC decisions. In February, the William Penn Foundation appeared to retaliate by suspending grant payments to city-related agencies.

Philadelphia students, parents, school workers and the community at large have attended meetings and held demonstrations against this outright theft of public schools. Another possible step could be to organize people’s assemblies to demand community control and to occupy the schools to keep them open.

We don’t need to settle for crumbs. As the students’ chants said: “If we fight we can win!”

S. Williams contributed to this article.