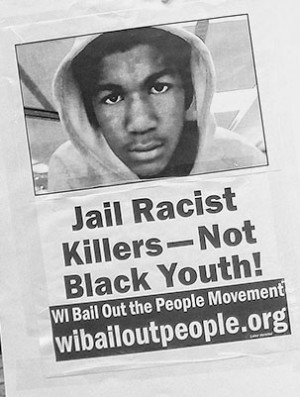 Black History Month was an important concession won in 1926 by a persistent mass struggle against racist lynchings and semi-slavery conditions, all part of the right to self-determination for the oppressed African-American masses in whatever form this may take.

But the truth is that Black History Month should not only be commemorated for just one month, February, but all year round to help connect the legacies and lessons of past movements and developments with present-day conditions and struggles — with the intent of pushing forward an anti-capitalist and anti-imperialist perspective.

This is no more evident than what happened one year ago on Feb. 26. This heinous incident, and the response to it, helped to bring almost unprecedented national and even international attention to the ongoing epidemic of racial profiling in the U.S.

The Feb. 26, 2012, event was the tragic murder of a 17-year-old African-American Trayvon Martin in a militarized gated community in Sanford, Fla. The admitted killer was would-be cop George Zimmerman, who had a sordid history of racially profiling Black youth as young as elementary school age.

An unarmed, hoodie-wearing Martin, targeted by Zimmerman after going to the store, was fatally shot to death attempting to defend himself. The Sanford police questioned Zimmerman and immediately released him based on Florida’s “Stand Your Ground” law, which states that anyone who feels they are being threatened has the right to defend themselves, even using deadly force. In other words, this law condones shooting first and asking questions later.

Once Martin’s parents, Sybrina Fulton and Tracy Martin, went public on what happened to their son, and once a petition went viral on Twitter calling for Zimmerman’s arrest, the demand for justice under the slogan, “We are all Trayvon Martin,” sparked mass anger and outrage that went from the internet to the streets.

On March 20, nationally coordinated protests led mainly by African-American youth occurred in cities, large and small, around the country. People of all nationalities, including high-profiled figures like the Miami Heat pro-basketball team, the Broadway cast of “Porgy and Bess” and musicians such as Prince, wore hoodies in honor of Trayvon Martin. Protests took place as far away as London and Sydney.

As these protests grew larger in number and more militant, with direct actions, Florida state authorities forced the Sanford police to arrest Zimmerman on second-degree murder charges in late April 2012. Zimmerman was eventually released on a million-dollar bond secured with funds he had raised from right-wing supporters. His trial is scheduled for the summer of 2013, but no date has been made public.

The racist murder of Trayvon Martin has helped to generalize the issue of the ongoing racist war against Black and Brown youth, east to west, north to south.

Demanding justice for Trayvon Martin goes beyond securing a conviction of Zimmerman, which is just. The broader issue, connected to Martin and other victims of racist terror, is to ultimately build a national, struggle-oriented movement to end this war — which includes police brutality, mass incarceration, disproportionate unemployment and underemployment, lack of education and more. This is the most important legacy of the tragic loss of Trayvon Martin.