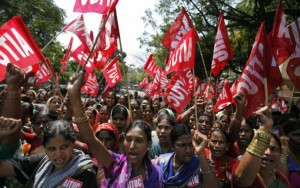 The working and oppressed classes of India showed their strength and determination on Feb. 20-21 with a general strike that completely shut down many parts of the country and deeply affected many more.

The All-India General Strike was called jointly by 11 Central Trade Unions and Independent Federations of Workers and Employees, many of which are affiliated with progressive or leftist parties. The demands include many items that will be familiar to workers around the world: protect the right to organize (end retaliation against organizing workers), stop using contract labor, raise the minimum wage and stop outsourcing jobs.

In a press release issued on Feb. 20, the unions stated that “the unprecedented response to the call of strike throughout the country, much beyond our expectations, reflects truly the anger of the people against the persistent increase in the prices of diesel, gas, coal, electricity and other essential goods for the bare need of the common people.” There were also reports that many unorganized workers took part in the strikes and demonstrations. (beforeitsnews.com, Feb. 21)

Although largely ignored by the bourgeois world media, the strike had a significant impact. It virtually shut down the banking and insurance sectors, industrial production and educational institutions in many parts of India, despite threats of reprisals by the national and state governments. Workers from private industries, including in the special economic zones, participated alongside public sector workers.

The southern state of Kerala was largely shut down, with no buses or open shops and educational institutions and factories closed, despite threats by the state government to deduct two days’ pay from strikers. More than 200,000 garment workers in the industrial city of Tirupur, in the state of Tamil Nadu, went on strike. Coal miners from the state-run Singareni Collieries Company walked off the job in the state of Andhra Pradesh.

In northern India, the states of Haryana, Punjab and Chandigarh were all heavily affected. In the city of Ambala in Harayana, Narender Singh, a bus driver and treasurer of an affiliated union, was killed Feb. 20 when a bus hit him as he was picketing. Angry protesters clashed with the police after the incident. More than a dozen union activists were injured, five of them seriously.

Auto workers in the Gurgaon-Manesar industrial belt, including at Maruti Suzuki, Hero MotoCorp and Suzuki Motorcycle India, joined the second day of the strike. In the western state of Gujarat, nearly 8,000 state-owned buses were off the road, and much of the banking sector was hit.

The capital of New Delhi was virtually paralyzed. In the industrial areas of Noida, near New Delhi, hundreds of factories and vehicles, including more than a dozen police cars, were damaged after workers blocked roads and clashed with police. Authorities were forced to bring in police from outside the city, along with the Provincial Armed Constabulary, to suppress protesting workers.

‘Total strike’ in most populous state

Across the country’s most populous state, Uttar Pradesh, the local media reported that the strike was total in the cities of Meerut, Ghaziabad, Noida, Kanpur, Varanasi, Lucknow, Saharanpur, Unnao, Moradabad and Allahabad. Major markets in Lucknow, like Aminabad and Hazratganj, were deserted, and operations at post offices and state-run banks were disrupted.

Thousands of rail and road passengers were stranded in the eastern states of Odisha and Bihar as protesters blocked the movement of trains, buses and auto rickshaws.

According to Reuters, “The Associated Chambers of Commerce and Industry said … the two-day strike was expected to cause a loss of 150 billion-200 billion rupees ($2.8 billion-$3.8 billion), hurting sectors such as banking, insurance and transport.”

The workers and oppressed people of India have shown that they will resist both government austerity and increased capitalist exploitation. They deserve the support and solidarity of progressives around the world.