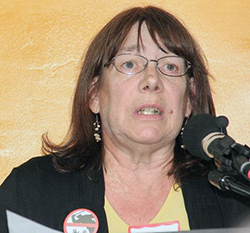 Workers World contributing editor Betsey Piette was honored with a prize at a ceremony at the International Book Fair in Havana, Cuba, for her essay on the struggle against fracking and the corporate threat to the global environment and local environments.

Piette’s prize-winning essay is entitled, “Drilling into the abyss: Why hydraulic fracturing is not a solution for global energy needs or global warming.” Piette has been writing regularly about the anti-fracking struggle for the past few years, especially in Pennsylvania, and is WW’s authoritative voice on this subject.

The Havana Book Fair, which ran from Feb. 14 to 22, is an enormous event, attracting hundreds of thousands of visitors. There were 1,000 titles — 4 million books in total — on display. This year’s fair paid special attention to books from Angola and commemorated the 160th anniversary of José Martí’s birth.

One of the fair’s events is the awarding of prizes in a contest called  “Thinking Against the Mainstream,” run by the Cuban Ministry of Culture, the Cuban Book Institute and the Social Sciences Publishing House. Some 174 essays were submitted from writers in 19 countries. Piette was awarded a special prize for her winning essay on environmental questions.

The three essays submitted by U.S. writers were all from regular contributors to Workers World newspaper.

Organizers in Cuba report reading Piette’s message, which we reproduce here, to the award ceremony on Feb. 19:

“Within the United States there is a growing movement to oppose hydraulic fracturing for shale gas and to raise awareness of the immediate and long-term danger of the unregulated industry that has unleashed a potential environmental catastrophe.  All too often our voices are ignored and our concerns are brushed aside. The natural gas industry’s sole concern appears to be how much profit it can make and how quickly. In turn, their money is used to dominate public opinion and silence opposition.

“While socialist Cuba is among the handful of countries that have banned fracking, unfortunately other countries continue to open their doors to corporations promoting this technology. So it is all the more important that this international essay contest has chosen to recognize the critical importance of addressing this development and its potential long term environmental impact.

“In writing my essay I was inspired by the words of Fidel Castro, who wrote ‘numerous dangers threaten us, but two of them — nuclear war and climate change — are decisive and both are ever further from approaching a solution.’ He blamed the discovery and exploration of vast reserves of shale gas as one reason the world was on an ‘inexorable march toward the abyss’ and concluded that the problem of shale gas was something ‘no political cadre or sensible person could ignore.’

“It is my hope that this essay can contribute to raising global awareness of the dangers of fracking and assist those seeking to bring a halt to this dangerous process.”

The winning and mentioned essays will be published in a book by the Social Sciences Publishing House. Piette’s regular coverage of the anti-fracking struggle can be found at workers.org.

The other essays written by WW contributors were, “The myth of Columbus,” based on a talk by Stephanie Adohi last October, and “The GI movement in the USA, the state and the dream of revolution,” by this writer.