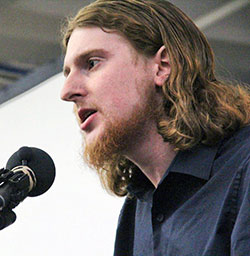 The revolutionary African-American poet Langston Hughes wrote this poem for a large gathering of Communists in 1932:

Hughes represented what was felt by millions of people in the U.S. during that time. There was mass unemployment during the Great Depression, but Communists were mobilizing the people to resist. Many African Americans were especially drawn to Communism during this time, because Communists were a large political force in this country who made clear they opposed racism and Jim Crow segregation.

The poem is relevant to our discussion of Hurricane Sandy because it points to a duty we have. When an outrage occurs, like the government response to Hurricane Sandy or Hurricane Katrina before that, or an act of police terror, we have a duty to explain it.

We must tell our co-workers, our fellow students, our fellow organizers and activists why this outrage is rooted in the system and how things could be different under socialism.

We can find the answer in the writing of Frederick Engels. He wrote that “under capitalism, the means of production only function as preliminary transformation into capital.”

What does this mean? It means that things only get done in this system if the capitalists can make money from it.

Houses aren’t constructed because people need shelter. Houses are constructed so landlords and bankers can make money off of them.

Schools aren’t built so children can grow up, learn about the world and become productive members of society. Schools are set up to make children grow up into productive workers.

Police don’t protect us from crime; police protect the private property of the bosses.

So it’s only natural that even in the center of world capitalism, the city where Wall Street is located, millions would be without power for days.

It’s only natural that self-serving charities like the Red Cross, which are linked with the Pentagon, would allow so many to be without.

It’s only natural that Wall Street lights would come back on while nearby Chinatown was left in darkness.

What was the most disgusting part? While people were lining up to get food and drink throughout the city, the New York Police Department showed up. They threatened people with arrest for standing in line to get relief. They pulled their guns and threatened people.

Why? Because the bosses hate it when we are together. They hate more than anything seeing us gathered in groups because our problems are the same and because we have different interests than those of the 1%.

When I saw the video of the power station exploding on East 14th Street, I was forced to think about another electrical facility.

After the workers and peasants overthrew the Czar and began constructing socialism in the USSR, they constructed the Dnieper Dam. This was the world’s largest hydroelectrical power plant at the time. Electrical engineers from all over the world came to see the Dnieper Dam and study it.

But this power plant was also blown up. As the Nazis were invading the country, trying to overturn the Soviet Union and restore capitalism, the workers blew it up so the Nazi invaders wouldn’t be able to use it.

And then after the Soviet Union was victorious — after they tore down the walls of Auschwitz, after they liberated half of the Korean peninsula, after fascism was driven from the earth — they rebuilt the dam even larger than before.

Yes, that was what was achieved when workers took power in the Soviet Union, a country that began constructing socialism starting with a very low level of development. Imagine what could be achieved in the United States.

To strengthen the fight for socialism, we will need a broad movement for people’s power. We need to help provide for the working class when the capitalists and their charities fail.

Langston Hughes’ words were correct. It’s now time to go to our class with our revolutionary program and move ­forward.