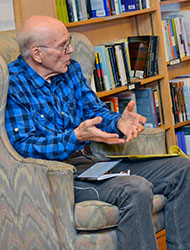 Author and Workers World Party leader Fred Goldstein was at the Inquiring Minds Bookstore in Saugerties, N.Y., in the Hudson Valley to discuss his latest book, “Capitalism at a Dead End: Job Destruction, Overproduction and Economic Crisis in the High-Tech Era.” The mid-February gathering showed a modest if growing interest in this type of analysis.

Marxism is a tough sell in the United States, especially when it’s accompanied by a truly revolutionary view of the current capitalist system. It was only 21 years ago, after the end of the Soviet Union, that pro-capitalist ideologues were promoting “the end of history” and the perpetual domination of capitalism as the closest equivalent to heaven on earth.

These days, that’s also a tough sell, even if the intellectual defenders of the status quo still dominate the internet, the air waves, the print media and the universities. But a stagnant economy, with another recession and rampant poverty in capitalist Europe, and perpetual unemployment throughout the capitalist world have wiped away the capitalists’ shine of 1992.

In Latin America, where there has been an upsurge in Marxist thought accompanying the election of progressive, and in some cases anti-imperialist, heads of state in some countries, there is even more interest in Goldstein’s book. In December the Spanish-language version came out, “Capitalism en un callejón sin salida,” and a flurry of reviews in Spanish and Portuguese have aroused interest both in the Iberian Peninsula — where unemployment is at 25 percent — and throughout Latin America.

The reviewers were not academic Marxists — although they may have academic credentials — but leading analysts of working-class parties. These include Manuel Raposo of Mudar de Vida (Change of Life) in Portugal, Manuel Navarrete of Red Roja (Red Network) in Spain, and Olmedo Beluche, a University of Panama professor and leader of the Movimiento Popular Unificado (Popular Unified Movement) in Panama.

Goldstein’s website has received reports that groups in Panama, Honduras and Brazil are reading and discussing his book, as are Colombian exiles in Europe, and that at least one Latin American labor leader has used the book as a valuable source for his presentation at an international conference.

The reviews, besides being distributed by their authors, have been posted on popular websites and disseminated from there. For example, the Portugese site ­odiario.info published Raposo’s review, which was then picked up by websites of communist organizations in Brazil. These plus the popular Spanish-language sites La Haine, Kaos en la Red, Rebelion and Venezuela’s Aporrea had a total of more than 10,000 hits from people reading the reviews.

The book exists in print in small quantities in Spanish at this time, but it can also be found in both languages on the author’s lowwagecapitalism.com site in pdf format, as well as on some other sites like La Rosa Blindada in Argentina.