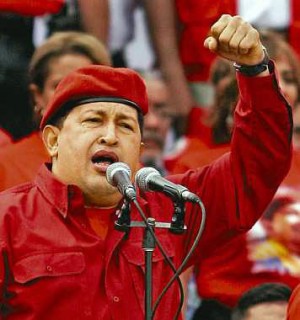 On Feb. 4, Vice President Nicolás Maduro of Venezuela read a message to the Venezuelan people from President Hugo Chávez — who is recuperating from cancer treatment in Cuba — to mark the 21st anniversary of the rebellion of February 4, 1992, known as the National Day of Dignity.  Below are President Chávez’s remarks in their entirety provided by the Venezuelan Embassy to the U.S.

Comrades, in commemorating the 21st anniversary of the civil-military rebellion of Feb. 4, 1992, I want to direct this fervently Bolivarian and revolutionary message to the people and the armed forces as an indivisible whole.

How much I regret being physically absent from our national territory for the first time on this luminous date of birth, but that is what is required by this battle I am facing for my full recovery in brotherly and revolutionary Cuba; however, my spirit and heart are with you on this Day of National Dignity.

There are dates on which all the volume of history is revealed and that mark the path of peoples once again; there are dates that seal and clear things up, that become a commitment and a signal of a destiny that has to happen to calibrate the past and let us see with greater clarity the liberating horizon, and Feb. 4, 1992, was one of those dates.

Those of us who, like Bolívar, Robinson and Zamora, took up arms and went out that dawn to risk our lives for the country and the people, were fully aware that Venezuela had reached the bottom three years ago during the rebellion of Feb. 27, 1989, a day that marked our path, when the people risked their lives fighting in the streets against the savage neoliberalism that Washington tried to impose on us.

Those of us in the military didn’t want to continue shouldering the disgrace of being the praetorian guard of a political class that was as oppressive and corrupt as it was criminal. Never again would they use us to drown the people’s calls for justice in blood.

The Caracazo marked an end and a beginning; the end of a system drowned in shame, the beginning of an era of change that required the rebirth of popular dignity.

Those of us who burst into the shadows of injustice and indignity that overwhelmed Venezuela in those days were, as Che Guevara said, guided by a great feeling of love; a love that was Bolivarian, of the people, rebellious, combative, an infinite liberating frenzy that brought us, as the liberator wanted, to cast off fear and save the nation.

Our poet Gustavo Pereira tells us with an eerie simplicity the following: “Love is the only important thing in the world.” It has been 21 years since that Feb. 4th, of anguish and the dawn, of bravery and sacrifice. The march continues to be difficult, but with the irresistible force of love we recall Bolívar, we are on our way to achieving definitive independence, a socialist and liberated nation.

I want to exalt today the role of Venezuelan women on Feb. 4th, of Columbas Rivas, Marisol Terán; a robust group of women that accompanied the rebellion, they were there at the moment of generosity and heroism, with all their patriotic fervor, all their abnegation.

The time is coming, history is coming; history made with the people that forge it each day, there is Feb. 4th like a sacred cry from our collective memory that told Venezuela to get up and move forward.  And thanks to the collective Lazarus that is the land of Bolívar, all of us are artifices of the resurrected nation, of the country that finally took in its arms the Bolivarian flag to be reborn in the light of dignity.

From the deepest reaches of the heart of the people I say, with Aquiles Nazoa, that thanks to Feb. 4th, every compatriot can with full certainty “have a tomorrow, look upon the countryside and say this is my city, this is my nation.”

Brothers and sisters, today after 21 years of that civil-military rebellion, that decision made with the greatest sense of love for Venezuela, which we thought and rethought as the only possible way to have a nation, we live in a really and truly free country.

On Feb. 4th our people saw the dawn of their hopes thanks to the military community; the people once again felt accompanied by patriotic soldiers. We left to brandish our swords in defense of social guarantees, of the rights of the greater Venezuelan community. We were only motivated by the ambition to become the heirs and followers of the independence army. We wanted to return to our Bolivarian essence, to truly be the people in arms forging liberty.

My history was already known. The patriotic and revolutionary military insurgencies in Carpano and Puerto Cabello, and in the 1960s created a historic opening, and despite the fact that both rebellions were brutally put down by the bourgeois democracy, a furrow for a seed remained. That is where we come from, and from further back, from Indigenous resistance, from the slave rebellions, from Chirinos, Gual and España, Miranda, Bolívar, Sucre, Zamora, and Cipriano Castro.

I recall a memorable passage from a great revolutionary thinker named Walter Benjamin: “The past comes with a temporal code through which it delivers redemption; there exists a secret meeting between past generations and our own.” We could very well say that this secret meeting took place on Feb. 4th, 1992, where the past, present and future received redemption.

Feb. 4th has been fully justified by history. Those of us who were against the Pact of Punto Fijo have been blessed by a people who are today at the vanguard of the fight for peace and justice, and who serve as examples for the peoples of the world.

Honor and glory for the fallen soldiers and students!

In 1828, our liberator wrote: “Patriotism is a sacred fire that cannot be hidden and that often, when it is extended in truly pure sentiment, leads to greater happiness for the country.” I have long meditated on these words from our great commander, and the more I do so, the more convinced I become that this was the fundamental reason that led us to undertake that heroic action on Feb. 4th. The sacred fire that stirred within could no longer be hidden.

To the brave Bolivarian soldiers, it is up to us to enhance that liberating fire of justice that will last century upon century, while we have the nation we now finally have.

Luis Alberto Crespo said of this servant: “His courage stems from that February 4th, and that courage is not just mine because I am not Chávez, Chávez is the people, and in reality and truth, as long as that sacred fire is extended in truly pure sentiment, it will be to the benefit of the greater happiness of our nation of the Americas and the immense nation we call humanity.”

We were not wrong in the certainty that encouraged the Bolivarian soldiers, which is identical to that which was personified in millions of fellow citizens at the time, and which is found in every corner of this nation that is making into reality the sentiment which spurred the rebellion.

I am going to repeat what I said 21 years ago: if our movement is triumphant, we will hand over power to the people so that they can strongly exercise it. And it is a fact that today the people exercise power strongly and fully.

Feb. 4th was a day that set off forces that are still expanding. Feb. 4th has not ended; its spirit should accompany us each day because the powers we confronted for more than two decades persist in their attempts to stop the course of history in Venezuela, in our Americas and in the world. They are the powers that threaten humanity and the planet with destruction.

The spirit of rebellion should live on in each of us to continue advancing and not be thwarted. Let us remember these words from our eternal leader, Bolívar: “Nothing is finished while there is still work to be done.” That is why the “for now” of 21 years ago, is today a “forever” for the Bolivarian people.

Let us always stay true to the ideal of our liberator: unity, unity, unity. Let us proclaim unity without wavering and build it each day. Let us be inspired by it, so that the empire and its lackeys in their repeated attempts to divide us cannot succeed. Let us allow the inestimable good of unity to flourish. We still have much of the nation to liberate, and that is why we need to be even more united as a people.

From my soldier’s heart I send an infinite embrace to the people, to the Bolivarian National Armed Forces; may you feel that I am with you on this Day of National Dignity. I am with you in my red beret and tricolor armband, strengthened by the people’s love, the love that heals me and gives me life. Feb. 4th will now and forever be blessed.