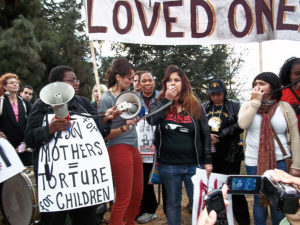 Chowchilla, Calif. — Over 400 anti-prison activists marched and rallied on country roads in front of two Chowchilla prisons on Jan. 26, demanding the immediate release of women prisoners and an end to overcrowding. They traveled from all over California — Los Angeles and Long Beach, Oakland, Sacramento and San Francisco, even Fresno and Modesto — with the same message, “No justice, no peace, set our people free!”

The state of California is under a court-ordered mandate to reduce its prison population and end prison overcrowding. According to organizers from the California Coalition for Women Prisoners, the Department of Corrections and Rehabilitation is currently closing Valley State Prison for Women in Chowchilla and converting it into a men’s prison. The women and transgender prisoners at Valley State will be transferred to two other already overcrowded prisons.

The Central California Women’s Facility sits across the street from Valley State and already incarcerates over 3,600 women prisoners, although it was originally built for 2,000.

CCWP, Critical Resistance, All of Us or None, Youth Justice Coalition and many other groups organized the Jan. 26 protest to demand that the state relieve overcrowding by releasing women prisoners.

These women’s prisons have been picketed and sued for two decades for mistreatment and medical neglect. In 1994, the first demonstration was held here to protest the denial of medical care and treatment for women prisoners with HIV/AIDS.

Former prisoners, prisoner advocates, the children of prisoners and others spoke out in front of the Central California facility to expose the torturous conditions inside for women and transgender prisoners. Opening up the rally was Samantha Rogers, former prisoner and CCWP activist, who stated, “We are here to make changes. We are here to demand that the state release these prisoners.”

Chris, described as “a survivor of 13 years of incarceration and torture” at Valley State, talked about the abuse the women and transgender prisoners suffer daily inside. Oday, a member of the Central Valley Dream Team, said, “I am undocumented and unafraid.” She exposed the links between attacks on the undocumented communities and the California prison-industrial complex.

Julio Marquez and Leslie Mendoza, from the Youth Justice Coalition in Los Angeles, fired up the crowd with solidarity statements. Marquez demanded, “We need to tear down all these prisons.” Charging that California is first in prison funding but 47th in education funding, Marquez stated: “It’s time to bring our women home. They are not receiving the care they need inside.”

Solidarity rallies were also held in London and Philadelphia. For more information about the campaign against overcrowding and for justice for women prisoners, contact the California Coalition for Women Prisoners at ­womenprisoners.org.